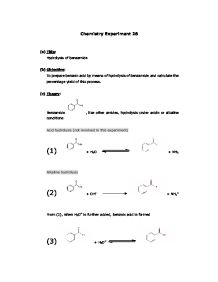 Chemistry Experiment 26 (a) Title: Hydrolysis of benzamide (b) Objective: To prepare benzoic acid by means of hydrolysis of benzamide and calculate the percentage yield of this process. (c) Theory: Benzamide, like other amides, hydrolysis under acidic or alkaline conditions Acid hydrolysis (not involved in this experiment) (1) + H2O + NH3 Alkaline hydrolysis (2) + OH- + NH4+ From (2), when H3O+ is further added, benzoic acid is formed (3)+ H3O+ In reaction (2), the ammonium gas evolved is alkaline and can be tested by wet red litmus paper, it should turn from red to blue. ...read more.

Also a suction pump is connected below to speed up the filtration. The filtrate should then be washed to remove any impurities. Lastly, by weighing the initial and final mass of the benzamide and benzoic acid respectively, the percentage yield of the process can be calculated. Moreover, by testing the melting point of the resulting benzoic acid solid with the melting point apparatus, the purity of the product obtained can be estimated, since the purer the benzoic acid, the sharper the melting point and the nearer to its theoretical value (~126�C) ...read more.