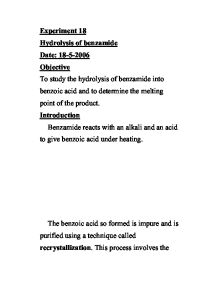 Experiment 18 Hydrolysis of benzamide Date: 18-5-2006 Objective To study the hydrolysis of benzamide into benzoic acid and to determine the melting point of the product. Introduction Benzamide reacts with an alkali and an acid to give benzoic acid under heating. The benzoic acid so formed is impure and is purified using a technique called recrystallization. This process involves the dissolving of the acid into boiling water to make a saturated solution and then allowing crystals to form. The crystals are then collected by suction filtration. Procedure 1. 3 g of benzamide was weighed out and put into a conical flask. 2. The benzamide was mixed with 50cm3 of NaOH. 3. The conical flask was fit with a cord and the mixture was heated for about 15 minutes. 4. The gas evolved was tested with a piece of pH paper. 5. The reaction mixture was cooled and hydrochloric acid was added until a white precipitate was formed. 6. The residue, then benzoic acid, was obtained by suction filtration. ...read more.

=0.0103 moles 5. Percentage yield: 0.0103/ 0.0290 = 35.7% 6. Melting point of the crystals: 120~126oC Conclusion 1. The percentage yield of pure benzoic acid produced is 35.7%. 2. The melting point of the benzoic acid ranges from 120~126oC. The acid is rather impure. Discussion 1. The loss of benzoic acid comes from the following sources: A. The reaction mixture was boiled twice. The first time was for dissolving benzamide to hydrochloric acid, and the second one was for recrystallization. Some of the benzoic acid was turned into vapour, which results in a loss of materials. B. While transferring the substances to different apparatus, not all of the substances were transferred during the process. C. Not all benzoic acid were crystallized during recrystallization. 2. A wide melting point range implies that the acid is impure. This is due to several reasons: A. Recrystallization was ineffective. B. While being left for 1 night, the acid was exposed in air and some impurities may enter the acid crystals. ...read more.