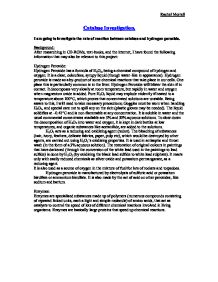 I am going to investigate the rate of reaction between catalase and hydrogen peroxide.

Catalase Investigation. I am going to investigate the rate of reaction between catalase and hydrogen peroxide. Background: After researching in CD-ROMs, text-books, and the internet, I have found the following information that may also be relevant to this project: Hydrogen Peroxide: Hydrogen Peroxide has a formula of H[2]O[2], being a chemical compound of hydrogen and oxygen. It is a clear, colourless, syrupy liquid (though water-like in appearance). Hydrogen peroxide is made as a by-product of some chemical reactions that take place in our cells. One place this is particularly common is in the liver. Hydrogen Peroxide will blister the skin if in contact. It decomposes very slowly at room temperature, but rapidly in water and oxygen when magnesium oxide is added. Pure H[2]O[2] liquid may explode violently if heated to a temperature above 100�C, which proves that concentrated solutions are unstable. Being aware to this, I will need to take necessary precautions; Goggles must be worn when handling H[2]O[2], and special care not to spill any on the skin (plastic gloves may be needed). The liquid solidifies at -0.41�C and is non-flammable at any concentration. It is soluble in water and the usual commercial concentrates available are 3% and 30% aqueous solutions. To slow down the decomposition of H[2]O[2] into water and oxygen, it is kept in dark bottles at low temperatures, and organic substances like acetanilide, are added to the solutions. H[2]O[2] acts as a reducing and oxidizing agent (redox). The bleaching of substances (hair, ivory, feathers, delicate fabrics, paper, pulp etc), which would be destroyed by other agents, are carried out using H[2]O[2]'s oxidising properties. ...read more.

conclusion that that may be inaccurate, as the bubbles may be different sizes, and we cannot establish a relative unit for measuring the total amount. So we decided to use an up-turned measuring cylinder, filled with and in a tub of water, with the tube underneath. This way we can accurately measure the oxygen and give recognisable units. (See Page 5 For diagram). In the experiment I will record the amount of oxygen gas produced every 15 seconds so that I can see if the speed the gas being made changes as the reaction undergoes. For the catalase effect on hydrogen peroxide investigation it would be best to choose one of these continuous variables to study: Volume of catalase enzyme Temperature of surroundings Volume of hydrogen peroxide Consistency of time recorded Strength of hydrogen peroxide [image008.gif] For my experiment my variable is going to be the concentration of hydrogen peroxide (in vol). Required Hydrogen Peroxide solution: 5 vol 10 vol 15 vol 20 vol Hydrogen Peroxide (ml): 2.5ml (25%) 5ml (50%) 7.5ml (75%) 10ml (100%) Water (ml): 7.5ml 5ml 2.5ml 0ml Total Volume (per experiment): 10ml 10ml 10ml 10ml Total Volume of Hydrogen Peroxide (whole experiment): 3 x 2.5 = 7.5 3 x 5 = 15 3 x 7.5 = 22.5 3 x 10 = 30 7.5 + 15 + 22.5 + 30 = 75ml Chemicals and Apparatus needed: Quantity: Potato Homogenate (Catalase enzyme) Hydrogen Peroxide (20 vol) Clamp Stands Bosses Clamps 20ml Syringe 5ml Syringe (to measure catalase) Test tube 100ml Measuring Cylinder (upturned) Plastic Tub Delivery Tube U-tubes Bung (with two holes) Water (to fill tub and measuring cylinder) ...read more.

* The force of the hydrogen peroxide being thrust into the catalase from the syringe will have been different as it was by inaccurate human ways. * The apparatus may have not been airtight (letting some oxygen produced escape). * Oxygen was already in the airtight apparatus before the solution began reacting, so this would obscure results. * When the u-tube was put under the measuring tube some needed oxygen may have accidentally escaped. * The potato homogenate was not pure catalase, so the results were not accurate, in comparison to the hydrogen peroxide. Prototype Apparatus (before) [image010.gif] We considered many of these problems before starting the experiment, so after a few dummy runs using the equipment layout as above, we used trial and improvement and we came up with these solutions: * We put vaseline around any joints, to create an air tight seal. * We swapped the catalase and the hydrogen peroxide around, so that the H[2]O[2] was in the syringe where as it had a larger volume (less chance of getting stuck in the tube). * We changed the syringe tube to vertical (less chance of contents getting stuck). * We used a manageable small amount of catalase to a larger amount of H[2]O[2] (approximately 1:15), which we found that the oxygen production rate was not too fast to measure. * We used a large measuring cylinder (we found that with even small amounts of solution, there is enough oxygen produced to almost fill a 100ml measuring cylinder). If I were to do this experiment again, I would consider all these problems more thoroughly. I would try and get access to more accurate measuring equipment and chemicals. By Rachel Morrell 9Mg [image011.gif] [image012.gif] ...read more.