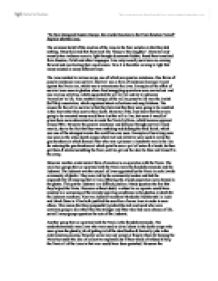 &quot;In Nazi Occupied Eastern Europe, the Jewish Reaction to the Final Solution Varied&quot; Explain why this is so.

“In Nazi Occupied Eastern Europe, the Jewish Reaction to the Final Solution Varied”

Explain why this is so.

The common belief of the reaction of the Jews to the final solution is that they did nothing. Many believed that they went like ‘sheep to the slaughter’. However only recently has evidence come to light through documents hidden, found then translated from Russian, Polish and other languages. Also only recently survivors are coming forward and recollecting their experiences. Now it is therefore coming to light that many resisted in many different ways.

The Jews resisted in various ways, one of which was passive resistance. One forms of passive resistance was survival. Survival was a form of resistance because it went against the Nazis aim, which was to exterminate the Jews. Examples of the effort of survival were seen in ghettos where food smuggling operations were carried out  and also various activities, which supported the will to live and try to add some ‘normality’ to life. Also another example of the will to preserve life was the Jewish Self Help association, which organised street collections and soup kitchens. The reason for the will to survive is that they believed that they were going to be resettled in the East rather than sent to their death.

Another group that co-operated with the Nazis is the Sonderkommando. The sonderkommando were Jews who were used as slave labour in the death camps who were given the ghastly job of getting rid of the dead bodies & basically jobs in the extermination process. However some may not accept or forgive them for helping the Nazis but under the idea of collective responsibility if they would of refused to help the Nazis all of the Jews in that area would have been punished. However the Sonderkommando did resist the Nazis by leaving incriminating evidence eg, leaving notes in the mass graves when they buried the Jewish corpses, in the hope that when the mass graves were found that the outside world will know what happened and that the experience of the hell they had to endure would not be lost, which was what the Nazis wanted, for the Jews just to have disappeared without anyone knowing what happened to them.

Now I am going to discuss the Jews that resisted by force in the death camps and in the ghettos. One example of amazing courageousness and bravery was seen in the Warsaw ghetto in which 700 young Jews defied an SS armoured brigade for a month.

The fact that Many Jews reacted different can be explained easily, people are different. It’s not surprising people reacted different because people react different to different situations, despite what the Nazis tried to achieve, the Jews were all individuals. When put up to the horrors that Jews were put up to during the reign of the Third Reich some resisted some didn’t that’s just how Humans vary, they did not go to the gas chambers like ‘sheep to the slaughter’ they went like human beings who were subjected to the most horrific experience that many will hopefully never happen again.