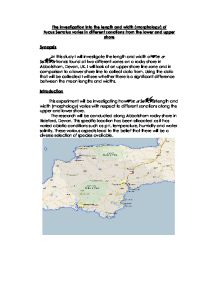 In this study I will investigate the length and width of Fucus Serratus fronds found at two different zones on a rocky shore in Abbotsham, Devon, UK. I will look at an upper shore line zone and in comparison to a lower shore line to collect data from

The investigation into the length and width (morphology) of Fucus Serratus varies in different zonations from the lower and upper shore Synopsis In this study I will investigate the length and width of Fucus Serratus fronds found at two different zones on a rocky shore in Abbotsham, Devon, UK. I will look at an upper shore line zone and in comparison to a lower shore line to collect data from. Using the data that will be collected I will see whether there is a significant difference between the mean lengths and widths. Introduction This experiment will be investigating how Fucus Serratus length and width (morphology) varies with respect to different zonations along the upper and lower shore. The research will be conducted along Abbotsham rocky shore in Bideford, Devon. This specific location has been allocated as it has varied abiotic conditions such as pH, temperature, humidity and water salinity. These various aspects lead to the belief that there will be a diverse selection of species available. Null Hypothesis There will be no significant difference between the different zonations and the width and length (morphology) of Fucus Serratus fronds. Variables Dependant variables are the things I will be measuring, such as: - The length and width of Fucus Serratus fronds; To measure the length of the fronds, a measuring tape will be used. The units for the measurement will be in millimetres (mm). When measuring the width of the fronds; callipers will be used. These are designed to measure in millimetres to a high degree of accuracy, so the units for measurement will be (mm). ...read more.

Anomalies only occur when there are inaccuracies within results and data obtained, however, by having much accurate data there would be fewer anomalies and the results more accurate. In areas where there were lots of different species of sea-weed and other similar species, there would be more competition for light and nutrients. The areas which I studied were areas of very high competition and so the Fucus Serratus frond sizes may have differed. In future investigations, both areas of competition and non-competition should be taken into account; this would leave us with much more accurate frond sizes. Random sampling avoids bias and during my investigation a random number generator method was chosen. This was a good and accurate method to use but in the future I would suggest trying some other type of sampling method; such as: line or belt transect. This type of sampling measures the distribution of species in a straight line across the habitat and the species are recorded. In this investigation the only type of sea-weed investigated was Fucus Serratus but from preliminary experiments I found that there were many other types of species I could have looked at which may have given a more representative sample. Some sea-weed species may have been more common than others, so next time more research will have to be done on the species in the area. Future investigations will have to be more research based. In this investigation they were measured based on their appearance as the common Fucus Serratus, no cross species variation was taken into consideration. Also, a wider range of data collected would make the research more accurate, so a minimum of 25 samples would be collected in the future. ...read more.

****
A good report of a difficult investigation which recognises the wide range of uncontrolled variables. Some errors in the method.