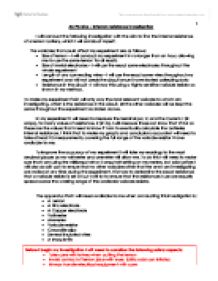 I will conduct the following investigation with the aim to find the internal resistance of a lemon battery, which I will construct myself.

The variables that could affect my experiment are as follows:

To make my experiment fair I will only vary the most relevant variable to what I am investigating, which is the resistance in the circuit. All the other variables will be kept the same throughout the experiment as stated above.

In my experiment I will need to measure the terminal pd, V, and the Current, I (in amps), for many values of resistance, R (in Ω), I will measure these as I know that V=E-Ir so these are the values that I need to know if I am to eventually calculate the batteries internal resistance. I think that to make my

So the pd, V, available to the rest of the circuit is:

I = the current through the cell

And r = the value of the internal resistance

So Ir = the pd across the internal resistor

To find the internal resistance experimentally:

As V = E – Ir, if you plot a graph of terminal pd, V, against current, I, the gradient of the graph will be equal to the internal resistance of the cell.

Because the battery deteriorates so quickly, this limits the amount of time that you can collect data without the results becoming more inaccurate, so repeating my experiment twice with the same lemon and electrodes probably also limited the accuracy of my experiment.

Next time I would take more results more quickly and be more organised to make my results and conclusions more accurate. I could also investigate this topic further by using different substances for my electrolyte like different fruit juices or acids. I could also try using different materials for the electrodes and see how that affected the internal resistance