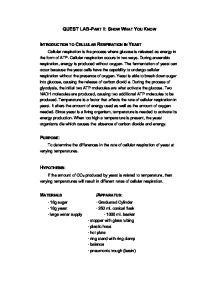 Introduction to Cellular Respiration in Yeast.

QUEST LAB-PART II: SHOW WHAT YOU KNOW INTRODUCTION TO CELLULAR RESPIRATION IN YEAST Cellular respiration is the process where glucose is released as energy in the form of ATP. Cellular respiration occurs in two ways. During anaerobic respiration, energy is produced without oxygen. The fermentation of yeast can occur because the yeast cells have the capability to undergo cellular respiration without the presence of oxygen. Yeast is able to break down sugar into glucose, causing the release of carbon dioxide. During the process of glycolysis, the initial two ATP molecules are what activate the glucose. Two NADH molecules are produced, causing two additional ATP molecules to be produced. Temperature is a factor that affects the rate of cellular respiration in yeast. It alters the amount of energy used as well as the amount of oxygen needed. Since yeast is a living organism, temperature is needed to activate its energy production. When too high a temperature is present, the yeast organisms die which causes the absence of carbon dioxide and energy. ...read more.

3. The thermometer was inserted and the temperature was monitor until it reached 23�C (23� should require no heating). 4. 3g of sugar and 3g of yeast were prepared. 5. The sugar, yeast, and water were mixed together for 5-10 seconds in a 250mL conical flask with a stirring rod. A stopper with glass tubing was then plugged into the conical flask. 6. The conical flask was placed into the hot bath and a temperature of 23�C was maintained. 7. The amount of displaced water in the graduated cylinder was recorded. 8. Steps 3 to 7 were repeated with the temperatures of 30�C, 40�C, 50�C, 60�C, and 70�C. DATA/OBSERVATIONS: DISCUSSION: Yeast ferments (or undergoes anaerobic respiration) when supplied with sugar. As we know, anaerobic respiration utilizes the sugars available to produce, in total, 2 ATP molecules, 2 NADH molecules, and 2 unused pyruvates. The reason temperature is usually a factor on enzyme activity and cellular respiration (which involves many enzymes) ...read more.

All other temperatures ranging from 23�-40� and 60�-70� resulted in smaller amounts of CO2 production. This is agrees with the theory that subjecting the enzymes to high temperatures will denature them, and render the yeast cells dead. SOURCES OF ERROR: There were very few sources of error that occurred during this lab. The only one we noted was that at 70�C, the water inside the conical flask started to evaporate slightly which may have caused a large displacement of water in the conical flask very quickly. This increase, however, stopped several seconds later and not much more water was displaced. CONCLUSION: Yeast absorbs sugar and warm water to produce energy for itself through anaerobic respiration. In this process yeast releases CO2 molecules. The more CO2 produced, the faster the rate of cellular respiration. The amount of CO2 produced by yeast is, in fact, related to temperature, and varying the temperatures will result in different rates of cellular respiration. Yeast works best at 50�C and begins to die near and above 60�C (which is why the amount of CO2 produced at these temperatures is lower than the amount produced at 50�C). ...read more.