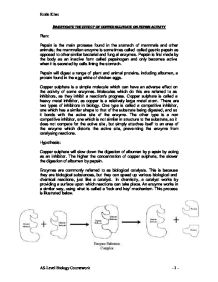 Investigate the effect of copper sulphate on pepsin activity.

INVESTIGATE THE EFFECT OF COPPER SULPHATE ON PEPSIN ACTIVITY Plan: Pepsin is the main protease found in the stomach of mammals and other animals; the mammalian enzyme is sometimes called called gastric pepsin as opposed to other similar bacterial and fungal enzymes. Pepsin is first made by the body as an inactive form called pepsinogen and only becomes active when it is secreted by cells lining the stomach. Pepsin will digest a range of plant and animal proteins, including albumen, a protein found in the egg white of chicken eggs. Copper sulphate is a simple molecule which can have an adverse effect on the activity of some enzymes. Molecules which do this are referred to as inhibitors, as they inhibit a reaction's progress. Copper sulphate is called a heavy metal inhibitor, as copper is a relatively large metal atom. There are two types of inhibitors in biology. One type is called a competitive inhibitor, one which has a similar shape to that of the substrate being digested, and so it bonds with the active site of the enzyme. The other type is a non competitive inhibitor, one which is not similar in structure to the substrate, so it does not compete for the active site, but simply attaches itself to an area of the enzyme which distorts the active site, preventing the enzyme from catalysing reactions. Hypothesis: Copper sulphate will slow down the digestion of albumen by pepsin by acting as an inhibitor. The higher the concentration of copper sulphate, the slower the digestion of albumen by pepsin. Enzymes are commonly referred to as biological catalysts. This is because they are biological substances, but they can speed up various biological and chemical reactions, just like a catalyst. In chemistry, a catalyst works by providing a surface upon which reactions can take place. An enzyme works in a similar way, using what is called a 'lock and key' mechanism. ...read more.

it is an accurate way to set an environmental temperature for a reaction to take place in, and it is able to maintain that temperature for the duration of the experiment. I will use a stopwatch to accurately measure how long each sample has reacted for, and to stop the reaction when the time limit has been reached. Thermometers will allow me to check whether the contents of the test tube have reached the desired temperature before the reaction begins. This will improve accuracy of results. I will use albustix because they provide a quantitative test for proteins, and it is not as subjective as other tests. Risk assessment Pepsin: IRRITANT, HARMFUL This is bought in powder form; all enzymes must be treated with care as they have biological activity. In powder form: Wear chemical goggles and use rubber gloves, do not inhale dust. As 1% solution: Wear eye protection, rubber gloves and protective clothing. Do not introduce to skin or eyes. If this happens, flood the affected area with cold water for at least 10 minutes. Do not ingest. In case of emergency, seek immediate medical attention. Albumen: Very low health risk, store in a clear labelled container away from direct sunlight or high temperatures Copper sulphate: As 0.1 mol, 0.01 mol and 0.001 mol solutions: Use eye protection, protective clothing, do not ingest. A lab coat and goggles should be worn at all times during the experiment and in a laboratory. Implications on ethics and the environment: My experiment involves the use of copper sulphate, an inorganic molecule which is not harmful to the environment in small amounts I will also use pepsin, an enzyme. Enzymes in biology are not classified as living organisms, so it is acceptable to use them in experiments and testing. It is not harmful to the environment in such small amounts. However, I will be using albumen, extracted from the white of chicken eggs. ...read more.

The reliability of the results was also limited by the constraints. There was not sufficient time to repeat each experiment more than three times, and it was unfeasible to do more than four different concentrations. Improvements: Improvements to the method for further experimentation would be to use a colorimeter to measure the amount of protein remaining in the reacted solution, instead of using albustix, as they are subjective methods, and the colorimeter is quantitative and less subjective. I would also consider using a buffer solution to keep the temperature of the solution constant throughout the duration of the reaction. However, this complicates the experiment, and the experiment is sometimes affected by the actual buffer solution If I were to do the experiment again and I had more time, I would use a wider range of measurements and repeat each concentration at least 5-6 times For further research, I would see how concentration of enzymes and substrates affect the reaction, and temperature and pH can affect the rate of reaction. I could also test how temperature and pH affect the inhibitor molecules. Changing two variables in an experiment can make it an unfair test, but it can help to overcome some of the limitations of the experiment. Potential sources for error in my experiment could be a number of factors. I did not wash and sterilise the equipment myself so I had no way of knowing whether the equipment was contaminated or not. I had to trust that the technicians had cleaned the apparatus beforehand. Another source for error was the fact that I used albumen from egg whites. I used two different eggs, so one of the eggs could have contained more protein than the other, so it would have greatly affected my results. The last source for error was my judgement when analysing the colour of the albustix. The method was subjective, so there could easily have been some mistakes in the readings. Emile Khan AS-Level Biology Coursework - 1 - ...read more.

****
A good account of the investigation with all relevant background theory covered, good presentation of results and a well worded evaluation. A little more care with the use of precise scientific terminology would be beneficial.