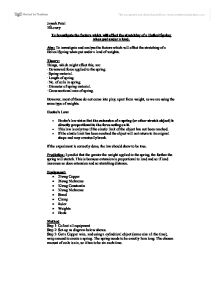 Investigate the factors which will effect the stretching of a Helical Spring when put under a load.

To investigate the factors which will effect the stretching of a Helical Spring when put under a load.

Aim: To investigate and analyse the factors which will effect the stretching of a Helical Spring when put under a load of weights.

However, most of these do not come into play, apart from weight, as we are using the same type of weights.

If the experiment is correctly done, the law should show to be true.

Prediction: I predict that the greater the weight applied to the spring, the further the spring will stretch. This is because extension is proportional to load and so if load increases so does extension and so stretching distance.

Overall I am pleased with the experiment as a whole. A problem that did occur was the making of the springs, as ever so slightly occasionally the spring coil would be bigger or smaller then the others. It would have been fairer to have ready made springs instead.

It would have been helpful to have more time, so we can do the experiment three times, instead of just once, and then do an average, so we receive more accurate results.

Also, the start length of 3cm may not have been true, as we only measured some of the springs, and not all of them, due to a forgetful mistake.

The results all seem fairly reliable. The procedure seemed to work impeccably, however we could benefit with more advanced equipment, and better measurement reading techniques. With improvements are experiment could become very accurate and flawlessly conclusive results.

The writer has set out their objectives clearly and as a result, been able to produce a clear report. It would have been good for the writer to explain why he decided to use particular diameters of wire (and this ...

The writer has set out their objectives clearly and as a result, been able to produce a clear report. It would have been good for the writer to explain why he decided to use particular diameters of wire (and this could have been experimented in a preliminary investigation). The writer went on to talking about fair results, however within their data they did not repeat any of their results (and if they couldn't they didn't explain why). The writer presents their data, however it would have been better if the writer did lines of best fits (and if they repeated their data they would be able to do error bars). The writer's analysis is good, and in the evaluation they explained why they only did only one set of results. It would have been better if the writer only focused on 2 wires and therefore would have had the time to do more experiments. Overall, a fair report.

The language that the writer has used is of a good standard. The writer was able to explain different scientific terms (so what Hooke's Law was). No where within the data does it say the scale for the weights, which could confuse the reader. In addition, the graphs that the writer drew should be scatter graphs with a line of best fit and the scales should have been labelled. They also mention safety, but they don't say what precautions should be taken out.

Spelling and grammar are good overall. As mentioned before, the main problem is that the layout of the graphs made it very hard to analyse. In addition, the writer should try and make tables not span on 2 pages. The writer should have also numbered pages too.