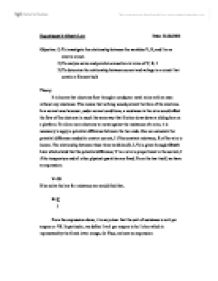 Investigate the relationship between the variables V, R, and I in an electric circuit.

Objective: 1) To investigate the relationship between the variables V, R, and I in an

2) To analyze series and parallel connection in terms of V, R, I

It is known that electrons flow through a conductor metal wires with an ease without any resistance. This means that nothing would prevent the flow of the electrons. In a normal case however, under normal conditions, a resistance in the wire would affect the flow of the electrons in much the same way that friction slows down a sliding box on a platform. To allow more electrons to move against the resistance of a wire, it is necessary to apply a potential difference between the two ends. One can calculate the potential difference needed to create a current, I if the constant resistance, R of the wire is known. The relationship between these three variables (R, I, V) is given through Ohm’s Law which stated that the potential difference, V in a wire is proportional to the current, I if the temperature and all other physical quantities are fixed. From the law itself, we have an expression: 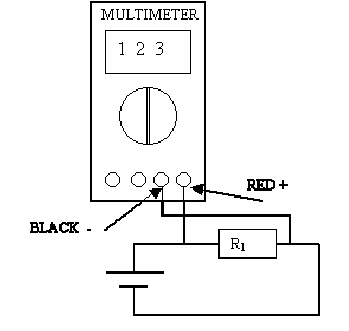 Thus the equivalent resistance in the circuit is:

The rule for the total resistance when the resistor is arranged in parallel is as followed:

As a conclusion we can say that the data obtain in the experiment obey the rule.

In part 4, a voltage versus current was obtained. At a certain point in the graph, a straight line is obtain which directly prove Ohm’s Law which stated that the voltage, V is proportional to the current, I and the slope of the graph is the resistance.

As a conclusion, we found out that the voltage, V is proportional to the current, I. The relationship for the variable V, I, R is V = IR