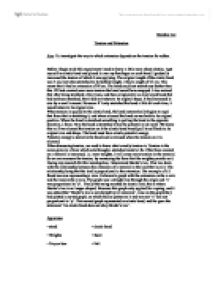 Investigate the way in which extension depends on the tension for rubber.

Brendan Lee Tension and Extension Aim: To investigate the way in which extension depends on the tension for rubber. Before I begin to do this experiment I need to know a little more about elastics. I got my self an elastic band and placed it over my forefinger on each hand. I gradually increased the tension of which I was applying. The original length of the elastic band was 3 cm, but when stretched to its furthest length, it had a length of 21 cm. This meant that it had an extension of 18 cm. The band could not stretch any further than this. If I had exerted even more tension the band would have snapped. I also noticed that after being stretched a few times, and then compared to an exact sized band that had not been stretched, that it did not return to its original shape. It had increased in size by a small amount. However if I only stretched the band a little bit each time, it would return to its original size. When tension is applied to the elastic band, the band automatically begins to repel that force that is stretching it, and when released the band moves back to its original position. When the band is stretched something is pulling the band in the opposite direction, a force. Now the band is stretched it has the potential to do work. ...read more.

Weight (g) Length of band (cm) 10 20 30 40 50 60 70 (It would be suggested to collect as many readings as possible with the time available. Between 500-1000 should be sufficient) This table should be filled in throughout the experiment. When each weight is on the elastic band, note down in the corresponding column the length of the elastic band. Safety: When placing the weights onto the elastic band, the main stand may become unstable due to the weights, so in order to avoid hurting one's self use a clamp to fasten the stand to the table. The only other safety issue that needs to be addressed is if the elastic band snaps, the weights will fall. To avoid any injury or damage one should place something underneath the weights to catch them when they fall, a tray, or box would be sufficient. Hypothesis: I think that the elastic band will increase in length, but not at a constant rate. I think this because when experimenting with my elastic band there came a point where the band would stretch no further, even with additional force, until it broke after a strong pull. And when pulling the band, I felt that the it stretched a lot without a great deal of force having been applied. So I feel that the extension of the elastic band will not be proportional to the load, proving that Hooke's law does not apply for elastic bands. ...read more.

If a graph is curved it means that the x-axis and the y-axis are not proportional to each other. I.e. x does not equal y. Therefore I have proved that an elastic band does not obey Hooke's Law, as stated in my Hypothesis. Also in my hypothesis I mentioned that little force is required to stretch the elastic band up to a certain point. This theory is proved by my graph, as at the origin there is an irregularity about the curve. This change in shape is where the elastic band needs little effort for it to extend. So my other prediction in my Hypothesis is correct. Evaluation: The main problem that I came across was measuring the length of the elastic band. It is difficult to accurately measure the length as the elastic band moves as it is hanging from the stand, and so trying to find the very top and bottom of it is difficult. To overcome this it might be helpful to have a set square attached to the ruler which sticks out so that it was flat on the bottom of the elastic band, and showed the measurement on the ruler. I would have liked to have done the experiment with different sized elastic bands, in order to find out whether the thickness effects the relationship between the load and the extension. More time was needed, as I would have liked to have collected more data than what I had in order to see whether the extension increased just before breaking. ...read more.