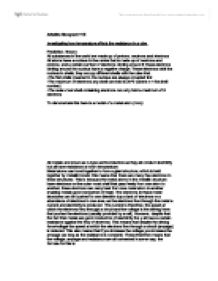 -The first shells (nearest to the nucleus are always occupied first

To demonstrate this here is a model of a metal atom (iron):

All metals are known as n-type semiconductors as they all conduct electricity but all have resistance at room temperature.

°C there would be infinity resistance, since infinity can never be reached, and the conclusion did not take into account β, that conclusion was wrong.

My second experiment and therefore the investigation failed to take this into account. However since I was using much lower temperature to investigate the relationship, there is no way I could have known about it. Or for that reason, β is so small I would probably not have been able to detect β using the apparatus I used in my experiments. However, at these very high temperatures where β starts to have an effect, most metals are near to their melting points, so this knowledge concerning β is therefore not very useful because it make very little difference before the metal melts and it’s electrical properties change (it becomes an electrolyte).

If I were to do this experiment again, I would make sure it is isolated as much as possible from any factors, which could affect the experiment out of proportion. I would therefore change the method and apparatus as appropriate to make sure these factors would not affect the results. To ensure more accurate results I would use apparatus that measures the resistance to a greater degree or accuracy. My first investigation was not a fair test, but my second was a fair test because the factors, which could have affected the results, were isolated from the experiment.

I don’t think I needed to do any extra research on the subject because I clearly had easily enough to back my results up and to show why certain results were anomalous.