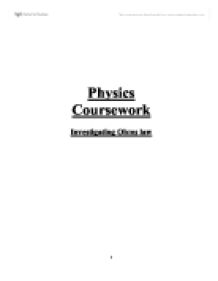 In my coursework I will be looking at the following three components:

My aim is to carry out experiments on these three components and find which component out of the three obeys Ohms law.

Ohms law gives the relationship between voltage, current and resistance in electrical circuits. Voltage is the push of the charges. Current is the flow of electricity. Resistance is the obstructions in the path of the current; therefore it slows the current down. There are four factors affecting resistance. They are:

By doing this investigation, I have found many things. Firstly I found what voltage, current and resistance are and what effect voltage and current have on the resistance of different components. I have also found how resistance can be calculated and how three factors (voltage, current and resistance) can form a formula in relation to each other making either one the subject of the formula. I also learnt how to set up an ideal practical experiment, obtain my results, tabulate them, convert them to graphs, analyse them and interpret my graphs. I also learnt to implement safe working procedures using a variable resistor. This ensured that the component was not left on in the circuit for a long period of time.