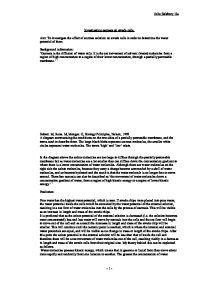 Weigh its mass on a top pan balance, and record these masses exactly and ensure the same top pan balance is used as they can often be inaccurate and using the same one should reduce this factor dramatically. 4. To compose the concentrations of sucrose solution: 0M, 0.2M, 0.4M, 0.6M, 0.8M, and 1M use the table below: Table to show volumes of distilled water and sucrose solution to make different concentrations: Concentration (M) Volume of sucrose solution (cm3) Volume of water (cm3) 0 0 20 0.2 4 16 0.4 8 12 0.6 12 8 0.8 16 4 1 20 0 5. Place the 20cm3 of solution into a boiling tube and place one swede chip in the same boiling tube and put it to rest in a test tube rack and place a bung on the boiling tube to stop any excess moisture entering or leaving the tube. 6. Use three chips of swede per concentration of sucrose solution in separate boiling tubes. 7. Leave the boiling tubes overnight 8. The next day remove the sucrose solution from each boiling tube and place each chip onto paper towels and dab each piece of swede to remove any excess moisture. 9. Weigh each chip on the top pan balance and then re-dab with the paper towels and reweigh, keep doing this until the weight is fairly constant and record it. 10. Directly after weighing the chips place it on the ceramic tile and using the ruler measure the length of the chip accurately and record it. 11. Once this has been completed for all 18 chips place all the apparatus away properly and dispose of the swede chips. Once the results are in tabular form the percentage change can be calculated and a graph drawn to show this percentage change against concentration for mass and length. Where each line of best fit crosses the axis at 0% a concentration value can be taken. ...read more.

as moisture is on the chip, however, it was difficult to tell when the chips had been dried enough so as to not over dry them and thus water would move out of the cells by osmosis due to the water potential outside being lower than inside the cells. A major problem as expected was the inaccuracy of the top pan balance, especially when re-weighing the chips, as the same top pan balance was not available which could mean that I was unable to get a true reading for the change in mass. Also if the chips were weighed inaccurately at any point along the experiment it would alter the final results and percentage change. However, this is hard to be controlled as human error is a major fact in this but it is difficult to restrict this problem. Finally I cannot be sure whether or not the temperature was constant at all times as the experiment took place overnight. Therefore I think it would be better if the experiment took part over 4-6 hours and the temperature checked every 30 minutes and adjusted if necessary using hot or cold water in a water bath then placing the boiling in that water bath. This should then allow enough time for osmosis to take place and an equilibrium reached but is also in a more realistic time for the temperature to be monitored. I also think that more concentrations should be experiment on around the solute potential, i.e. between 0.5M and 0.6M. This could make the outcome of solute potential a lot more accurate. After reviewing my results it is clear that as so many anomalous results have occurred these anomalies should have been redone which would have hopefully eliminated these and given me stronger proof on which to base my conclusion. To extend this investigation further I would use a greater variety of concentrations e.g. 1.4M to extend the graph further and prove whether my prediction is true as the concentration increases even further. ...read more.