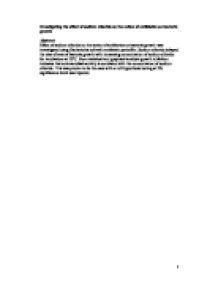 Investigating the effect of sodium chloride on the action of antibiotics on bacteria growth Abstract Effect of sodium chloride on the action of antibiotics on bacteria growth was investigated using Escherichia coli with antibiotic penicillin. Sodium chloride delayed the size of area of bacteria growth with increasing concentration of sodium chloride for incubations at 25�C. from statistical and graphical analysis growth inhibition indicates that antimicrobial activity is correlated with the concentration of sodium chloride. This was proven to be the case with a null hypothesis testing at 5% significance level was rejected. Aim To investigate how varying concentration of sodium chloride affect the action of antibiotic on bacteria growth by measuring the area of bacteria growth inhibition around the antibiotic discs on an agar plate. Rationale Cystic fibrosis is one of the most commonly inherited diseases in Europe affecting at least 1 in 20 persons. [1]"It is an autosomal recessive condition whereby two alleles carrying a polymorphism in the cystic fibrosis transmembrane conductance regulator (CFTR) gene" fails to function properly due to mutation in the gene. Fig 1 shows the structure of cystic fibrosis transmembrane regulator (CFTR) The CFTR protein may be missing and if present does not function correctly. When there is too little water in the mucus, chloride ions cannot be secreted across the apical membrane and there is no blockage of the epithelial sodium ion channel. Since the sodium ion channels are constantly open there is a continual absorption of sodium ions by the epithelial cells. The raised level of sodium and chloride ion cause a difference in concentration gradient and water is drawn out of the mucus into the cell. This cause the mucus to become more viscous, causing difficulty for the beating cilia to move. As a result the mucus is not effectively removed from the lungs causing build up of sticky mucus in the nasal passage. This mucus frequently becomes infected with bacteria. ...read more.

Do not contain any other ions; using non distilled ion content in water has to be controlled to be able to measure the effect of sodium ions and chloride ions on the action of antibiotics. Table 2 Penicillin antibiotic disc Tripod Maker pen for labelling dishes. 10 Sterilised Mc Cartney bottles containing 15cm3 of nutrient agar in an agar bottle Masking tape. Access to non-pathogenic culture of Escherichia coli Access to autoclave and autoclave bags or pressure cooker 250cm3 beaker Sterile Petri dish Method 1. Make standard solution of varying concentration, see appendix A. 2. Prepare agar plates with the sodium chloride solution and nutrient broth seeded with bacteria 3. follow all safety precautions, see risk assessment 4. Collect the bottle with the 15cm3 of sterile agar nutrients. Unscrew the bottle, and then place it in a hot water bath of about 50�C to melt. 5. Leave the agar in the water bath until you are ready to use them. 6. Dissolve 28.86g of NaCl in 250cm3 of distilled water in a volumetric flask. Make solution of concentration as shown in table 1, see appendix 1 7. Place each of the standard dilution formed into separate sterile McCartney bottles. 8. Place the NaCl McCartney bottles and its content in the 50�C water until you are ready to use them. 9. with your working area with ethanol, then set up a yellow Bunsen flame to keep contaminants out 10. Place sodium chloride solution from each McCartney bottle into a designated Petri dish using aseptic technique. Lift lid only enough to allow entry of pipette. Pour in the 15cm3 of the agar nutrients into the plate using a sterilised volumetric cylinder. Use an inoculating loop to evenly spread the e.coli over the plate Allow the agar to slightly set before placing the penicillin antibiotic disk. 11. Using sterile forceps, place a penicillin antibacterial disc onto the surface of the inoculated nutrient agar. ...read more.

onto the active site of the enzyme necessary for the cross-liking of bacterial cell way. If the synthesis of cell wall of e.coli is not inhibited then growth of e.coli will not be inhibited too. This makes penicillin ineffective. When This principle is applied to cystic fibrosis, I can infer that the reduction in antimicrobial activity in cystic fibrosis patients is due to interaction of sodium cations and the electronegative chlorine anions with polar groups in lyzomes and other natural antimicrobial proteins in cystic fibrosis patients makes them prone to infection. Overall this investigation have been successful at proving that as sodium chloride concentration increases the diameter of zone of growth inhibition decreases at 5% significance level. From the compelling results of this investigation and with reference to the research studies published in the American journal of respiratory and molecular biology I conclude that large salt concentration weakens antimicrobial activity in the airways of CF patients. I believe there are limitations in method and the variety of antibiotics available of the investigation. I suggest that further experiments should be carried to with varied range of concentration to see if the trend shown in my graph is continuous. I suggest that other antibiotics which have similar properties to penicillin should be investigated and other salts should be investigated. Further research in this area could result in the possibility of treating cystic fibrosis with salt-insensitive antimicrobial factors and can be extended to other areas to treat other upper respiratory tract infections. Reference: [5] American journal of respiratory and molecular biology, authors of article: M. Travis, Barbara-Ann D. Conway, Joseph Zabner, Jeffrey J. Smith, Norma N. Anderson, Pradeep K. Singh, E. Peter Greenberg, and Michael J. Welsh Activity of Abundant Antimicrobials of the Human Airway Am. J. Respir. Cell Mol. Biol. 1999; 20: 872-879 : I believe this is a reliable source of information as it a reputable journal which shows off the research studies carried out by scientists in the field of respiratory and molecular biology. [6]http://www.chm.bris.ac.uk/webprojects2002/thornton/how_does_penicillin_work.htm [fig2]http://www.3dscience.com/img/Products/Images/clip_art/Inhibition%20of%20Penicillin-Binding%20Proteins_web.jpg Penicillin molecule: http://www.bio.miami.edu/~cmallery/255/255enz/penicillin.gif ?? ?? ?? ?? 1 ...read more.