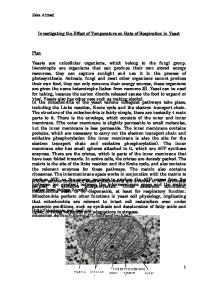 Investigating the Effect of Temperature on Rate of Respiration in Yeast

Investigating the Effect of Temperature on Rate of Respiration in Yeast Plan Yeasts are unicellular organisms, which belong to the fungi group. {Autotrophs are organisms that can produce their own stored energy resources, they can capture sunlight and use it in the process of photosynthesis. Animals, fungi and most other organisms cannot produce their own food, they can only consume their energy sources, these organisms are given the name heterotrophs [taken from resource 3]}. Yeast can be used for baking, because the carbon dioxide released causes the food to expand or 'rise'. Yeasts also has other uses such as making alcohol. In the mitochondria of the yeast various biological pathways take place, including the Links reaction, Krebs cycle and the electron transport chain. The structure of the mitochondria is fairly simple, there are basically 4 main parts to it. There is the envelope, which consists of the outer and inner membrane. {The outer membrane is slightly permeable to small molecules, but the inner membrane is less permeable. The inner membrane contains proteins, which are necessary to carry out the electron transport chain and oxidative phosphorylation (the inner membrane is also the site for the electron transport chain and oxidative phosphorylation). The inner membrane also has small spheres attached to it, which are ATP synthase enzymes. There are the cristae, which is parts of the inner membrane that have been folded inwards. In active cells, the cristae are densely packed. The matrix is the site of the links reaction and the Krebs cycle, and also contains the relevant enzymes for these pathways. The matrix also contains ribosomes. The intermembrane space works in conjunction with the matrix to produce ATP, as the energy required to produce the ATP comes from the hydrogen ion gradient between the intermembrane space and the matrix [taken from biology 2 book]}. {Under aerobic conditions, yeast mitochondria are involved in ATP synthesis coupled to oxidative phosphorylation. ...read more.

But methylene blue reaches a definite point where it has all gone, unlike the TTC which continues reacting for a long time. I will use 3 drops of methylene blue for my experiment because it is not too much so that the experiment takes an extremely long time to be carried out. But it is not too small so that at higher temperatures I do not get an unreliable amount of time. Variables The variables have been discussed earlier, but I will link them to the chosen experiment to make it clearer on what I plan to do. PH level will have to be controlled because it effects the structure of enzymes. The pH level should remain constant throughout the experiment without my need to interfere. The yeast concentration (linked to enzyme concentration) must to be kept constant. If different yeast concentrations are used then the results will be extremely unreliable. As I have explained earlier, the enzyme concentration greatly affects the rate of reaction to a certain extent. So if the concentration of the yeast varies, it will affect the rate of respiration in the yeast too. I will therefore have to use the exact same yeast suspension for my entire experiment, or my results will be unreliable. I will also use the same amount of yeast for each temperature in every repetition. The glucose concentration (linked to substrate concentration) must also be kept constant. If the concentration does not stay the same it will take different amounts of time for the methylene blue to decolourise. Earlier I explained how substrate concentration affects rates of reaction. So if there is more glucose present, the reaction will go very fast, because rate of respiration will increase. If this varies then the results will be entirely unreliable. I will therefore use a constant concentration of glucose in my yeast suspension I keep the amount of times I invert the test tube constant. ...read more.

Adding methylene blue had to be done carefully so I didn't accidentally add more than 3 drops, this was done accurately by me, so it could not have been a source of error. But the volume of the drops probably always varied from drop to drop. If three small drops were put into a yeast suspension which had more yeast suspension in it by human error, the methylene blue indicator would disappear much faster. This source of error could have been another reason for my anomalous results. Over the two days there was a variety of methylene blue bottles available to me. If I used two different bottles over the two days, the concentrations could be varied, due to contamination or dilution. This would have seriously affected my results, and could have led to my anomalous results. Other small things could have affected the results and could have caused anomalies. The syringe may not be entirely clean for every repetition, because it is used over about 15 times. I could not clean it with water, or else water may contaminate it, causing the yeast suspension to become slightly dilute on some occasions. There was a small amount of methylene blue remaining on top of the solution. This methylene blue was reacting with the oxygen in the air. The temperature in the water bath may not have been entirely uniformly distributed, due to little mixing. Accuracy of results Although I obtained 2 anomalous results, I believe that overall my experiment was decent and a success. The results came out as predicted, and the graph came out as suspected. The reliability of my results can be challenged, because there were many limitations that could have caused my reliability to be bad. But the only unreliable thing my results could have given was an overall higher rate of respiration, or overall lower rate of respiration. This would have not really affected my reason for doing this experiment, which was to see how temperature affects the rate of respiration in a yeast organism. Talk about measuring apparatus. Quote results Zaka Ahmad 1 ...read more.