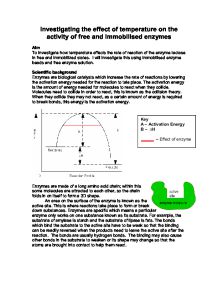 Investigating the effect of temperature on the activity of free and immobilised enzymes.

Investigating the effect of temperature on the activity of free and immobilised enzymes Aim To investigate how temperature affects the rate of reaction of the enzyme lactase in free and immobilized states. I will investigate this using immobilised enzyme beads and free enzyme solution. Scientific background Enzymes are biological catalysts which increase the rate of reactions by lowering the activation energy needed for the reaction to tale place. The activation energy is the amount of energy needed for molecules to react when they collide. Molecules need to collide in order to react, this is known as the collision theory. When they collide they may not react, as a certain amount of energy is required to break bonds, this energy is the activation energy. Enzymes are made of a long amino acid chain; within this some molecules are attracted to each other, so the chain folds in on itself to form a 3D shape. An area on the surface of the enzyme is known as the active site. This is where reactions take place to form or break down substances. Enzymes are specific which means a particular enzyme only works on one substance known as its substrate. For example, the substrate of amylase is starch and the substrate of lipase is fats. The bonds which bind the substrate to the active site have to be weak so that the binding can be readily reversed when the products need to leave the active site after the reaction. The bonds are usually hydrogen bonds. The binding may also cause other bonds in the substrate to weaken or its shape may change so that the atoms are brought into contact to help them react. After the reaction the product leaves the enzyme and the enzyme to free to start again with another substrate molecule. They are generally more stable in concentrated, rather than dilute, solutions. "Lock and Key" hypothesis They only have one substrate because the active site is formed in a different shape for each enzyme, where only one substance can fit. ...read more.

and for 40?C the average % glucose after 7 minutes was triple that of 30?C (from 1% to 3%). Possible causes for these errors were that - * The beads may have contained slightly more enzyme which would mean that there would be a higher possibility of forming enzyme-substrate as increased enzyme concentration is proportional to increased rate of reaction. * The Diabur strips may have been left too long so the colour may correspond to a higher % glucose when read. * The pH levels may have changed which may provide closer to optimum condition for the enzymes which may lead to an increase in the rate of the reaction. * If the lactase and the sodium alginate weren't mixed properly some beads may contain less or more lactase than others. This would either reduce or increase the rate of reactions. * Some of the immobilised beads contained a lot of air as air entered the syringe when the suspension was being sucked up in the syringe. This would decrease the amount of enzyme and so would reduce the rate of reaction. If I was to conduct the experiment again, I would make sure that it was more accurate overall. As I feel that the experiment doesn't give accurate enough results, I would use a different experiment which would be easier to measure. An example of this would be using an enzyme that has a gas as a product, as this can be measured to the nearest 0.5mm3. Examples of enzymes which catalyse an experiment which has a gas as a product is catalase which speeds up the reaction of converting hydrogen peroxide into oxygen and water. With the above taken into account, I would say that my conclusion is not very secure due to the fact that there were several errors. Subsequently, the results do not provide a very stable evidence for support of my hypothesis. Although the percentage error of individual equipment is small, the procedure error of the experiment is quite high as the results had to be determined by eye. ...read more.