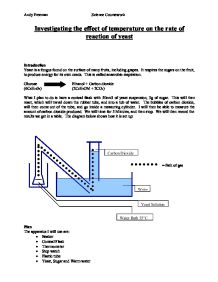 Investigating the effect of temperature on the rate of reaction of yeast.

Investigating the effect of temperature on the rate of reaction of yeast Introduction Yeast is a fungus found on the surface of many fruits, including grapes. It respires the sugars on the fruit, to produce energy for its own needs. This is called anaerobic respiration. Glucose Ethanol + Carbon dioxide (6C6H1206) (2C2H5OM + 2CO2) What I plan to do is have a conical flask with 50cm3 of yeast suspension, 3g of sugar. This will then react, which will travel down the rubber tube, and into a tub of water. The bubbles of carbon dioxide, will then come out of the tube, and go inside a measuring cylinder. I will then be able to measure the amount of carbon dioxide produced. We will time for 5 Minutes, and then stop. We will then record the results we get in a table. The diagram below shows how it is set up: Plan The apparatus I will use are: * Beaker * Conical Flask * Thermometer * Stop watch * Plastic tube * Yeast, Sugar and Warm water * Rubber Bung & rubber tubes The variable ...read more.

Prediction The substances that control all living things are called enzymes. Their job is to break down glucose. In yeast, they turn the sucrose (Sugar) into carbon dioxide and ethanol. Enzymes work by having a unique shape, which only fits certain substances. They collide with the enzymes, which stimulate a chemical reaction, which cuts the molecules at the 'active site'. The substance fits into the enzymes, unique to that molecule. They then connect when they collide, and the active site breaks the molecules up. As the temperature increases, there is more energy there for the particles to be going around, which means that they have more speed and force. This, as a direct result, speeds up the reaction. This is because there will be more collisions between the enzymes and the substances. However, if the temperature gets too high, the whole procedure will stop or at least slow down. This is because the temperature warps the shape of the special size 'gap' in the enzyme, which means that they won't connect. ...read more.

This will slow down and eventually stop the reaction all together." If we had tested the yeast at temperatures of 45�C and 43�C, we would be able to determine the exact peak temperature of the yeast, before it denatures. Evaluation I believe that my experiment was very accurate. The weighing, I feel, was very accurate, but the temperatures could have been better. Each temperature may be out by about 1�C each time. To improve my procedure, I would make sure that I took a lot more care over measuring the temperature. The temperature could be improved by using an electric heater, to constantly keep water at a certain temperature. This would have meant that the results would have been more accurate, providing fairer results. I am able to draw an accurate conclusion, because we were careful with the variables. Any further work I would do is to repeat the procedure, at least 3 more times, improving even more on the quality of the results. I would also make the quantities the variables; however, this will make the results a lot more infrequent. Andy Freeman Science Coursework ...read more.