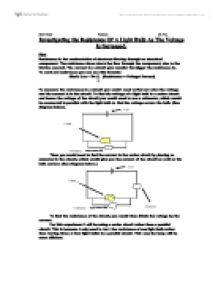 Resistance is the confrontation of electrons flowing through an electrical component. The resistance slows down the flow through the component, due to the friction created. The current in a circuit gets smaller the bigger the resistance is.

To work out resistance you can use this formula:

Then you would need to find the current in the series circuit by placing an ammeter in the circuit, which would give you the current of the circuit as well as the bulb current. (See diagram below.)

To find the resistance of the circuit, you would then divide the voltage by the current.

For this experiment I will be using a series circuit rather than a parallel circuit.

My results were good enough to support the prediction and for this reason I think my investigation was worth carrying out.

Further work to this experiment could have been done with a new reliable rheostat which would give me more accurate results. Also I could have changed the make of the light bulb to see if a different make of light bulb would have given similar results and verified the prediction. Using a different light bulb may give different results as the metal filament may be different but the general pattern should be the same.