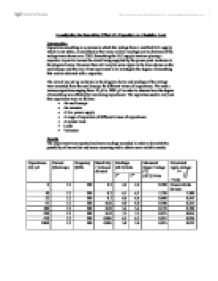 Capacitive smoothing is a process in which the voltage from a rectified D.C. supply, which is not stable, is smoothed so that more reliable readings can be obtained of the voltage trace shown on a CRO. Smoothing the D.C supply involves placing a capacitor in parallel across the circuit being supplied by the power pack as shown in the diagram below. However there still may be some ripple in the trace shown on the oscilloscope and the aim of my experiment is to investigate the degree of smoothing that can be achieved with a capacitor.

The circuit was set up as shown in the diagram above and readings of the voltage were recorded from the oscilloscope for different values of capacitance. We used a various capacitors ranging from 10 μF to 1000 μF in order to observe how the degree of smoothing was affected by increasing capacitance. The apparatus used to carry out this experiment were as follows:

The experiment was repeated and more readings recorded in order to diminish the possibility of anomalies and errors occurring and to obtain more reliable results.

From the results table and the graph of the Ripple Voltage against Capacitance, we can clearly see that as the capacitance increases the ripple voltage decreases. A curve of this sort of nature indicates an inverse proportion relationship, between the two variables V and C, as shown by the equation:

Where we can see that   V1    provided that I and f remain constant. This can

An anomaly has been highlighted on the graph, anomalous results can occur as a result of errors in calculation or measurement. To overcome the occurrences of anomalies several readings should be taken to diminish the possibility of anomalies taking place.

I= the current taken by the circuit

We can test the

Based on the gradients of the lines of best fit of the graphs that I have produced, I find that the method of carrying out this experiment is quite reliable as they are as predicted. Nevertheless, firm conclusions cannot be drawn from the evidence because, as mentioned before, there is still room for improvement in minimising errors and occurrences of anomalies as far as possible.

Human errors such as taking readings from the oscilloscope and the ammeter are common errors. Parallax error, where the line of vision did not meet in line with the pointer on the scale is an error that could have occurred. To overcome this error, there are some ammeters designed with a mirror helping to ensure that such errors do not occur which I could have used. Zero errors are also common with ammeters. I should also ensure that the ammeter has been zeroed in order to get fair and reliable results. Zeroing of the ammeter involves making sure that the ammeter is at the point zero between the readings (at each interval).

The mains source will also consume some of the energy as it will have internal resistance. This means that values of the current and voltage would actually be greater than what is shown on the meters.