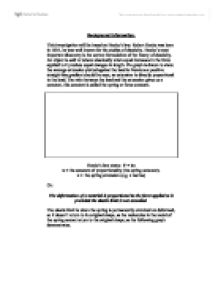 Investigation based on Hooke's law.

This investigation will be based on Hooke’s law. Robert Hooke was born in 1635, he was well known for his studies of elasticity. Hooke’s most important discovery is the correct formulation of the theory of elasticity. An object is said to behave elastically when equal increases in the force applied to it produce equal changes in length. If a graph is drawn to show the average extension plotted against the load in Newtons a positive straight-line gradient should be seen, as extension is directly proportional to the load. The ratio between the load and the extension gives us a constant, this constant is called the spring or force constant.

k = the constant of proportionality (the spring constant).

The deformation of a material is proportional to the force applied to it provided the elastic limit is not exceeded.

Elasticity can also be shown in this simple diagram:

The load should increase steadily by 100 grams each time.

The extension should be measured in the same way each time, preferably centimetres.

The extension or stretch should be measured with a ruler each time.

I began by setting the apparatus up correctly. I proceeded to do the single spring first. I measured the length of the spring, to work out the extension when I added weight to it. Then I added 1 Newton to the spring and recorded the extension, and proceeded to do this until I reached 6 Newtons. Then I removed 1 Newton one-by-one and recorded the reduction. This made my results more accurate. The experiment had no obvious problems.

The clamp stand was slipping due to the weight of the mass hanger.

The extension of the springs was not always read at eye level, due to human error.

The ruler cannot be completely accurate; the ruler is only accurate to +/- 0.1 centimetres.

These points can be improved by:

Design a new pointer, for example a fixed piece of metal to the spring and use a spirit level to make sure it is at 90o.

Design and make a piece of plastic with measured and cut grooves for the mass hanger and the springs to be securely placed on.

Fix the clamp stand to the work area.

Use a spirit level to make sure that the extension is always read at 90o.

Further experiments could be done to follow on from this experiment. Two experiments, which could be carried out, are firstly using three or four springs in series and parallel formations to see whether a relationship can be found. Secondly, springs of different materials could be used (for example copper, aluminium and plastic) to test how different materials affect the extension of springs.

Due to the molecular make-up of different metals it may be possible that r (the distance between the molecules in the metal) maybe different. In a further experiment we could investigate the elasticity point in different metals. This could give us indication to their usefulness in building materials, i.e. in suspension bridges. In a suspension bridge the cable needs to be strong, yet, elastic. This enables the bridge to move in the wind without snapping.