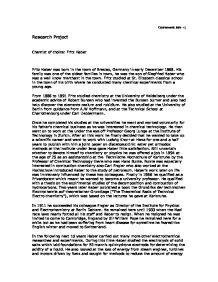 Investigation into the chemist Fritz Haber

Coursework.info =) Research Project Chemist of choice: Fritz Haber Fritz Haber was born in the town of Breslau, Germany in early December 1868. His family was one of the oldest families in town, he was the son of Siegfried Haber who was a well know merchant in the town. Fritz studied at St. Elizabeth classical school in the town of his birth where he conducted many chemical experiments from a young age. From 1886 to 1891 Fritz studied chemistry at the University of Heidelberg under the academic advice of Robert Bunsen who had invented the Bunsen burner and also had help discover the elements cesium and rubidium. He also studied at the University of Berlin from guidance from A.W Hoffmann, and at the Technical School at Charlottenburg under Carl Liebbermann. Once he completed his studies at the universities he went and worked voluntarily for his father's chemical business as he was interested in chemical technology. He then went on to work at the under the eye off Professor Georg Lunge at the Institute of Technology in Zurich. ...read more.

In 1911 he succeeded his colleague Engler as Director of the Institute for Physical and Electrochemistry at Berlin Dahlem. He remained here until 1933 when the Nazi race laws nearly forced all his staff and Haber to resign. When he resigned he was invited to come to Cambridge, England by Sir William Pope he remained here for a while but as he had been suffering from heart disease for sometime he feared the English winter and moved to Switzerland. In the following next 10 years Haber carried out many more other electrochemical researches and experiments. During this time Haber studied the electrolysis of solid salts which laid foundations for Biilmann's quinhydrone electrode for determining the acidity of a liquid. He also looked at the loss of energy from steam engines, turbines and motors driven by fuels and sought for methods to reduce the amount of energy lost in which he succeeded by finding a solution for the combustion of carbon monoxide and hydrogen. ...read more.

Therefore after modifications of the Haber process lead to the production of ammonium sulphate which is used as a soil fertilizer, it is also used in the production of nitric acid as, the principle used for this process and the subsequent development of the control of catalytic reactions at high pressures and temperatures, led to the synthesis of methyl alcohol by Alwin Mittasch and to the hydrogenation of coal by the method of Bergius and the production of nitric acid. The nitric acid produced could have been used for the production of such explosives such as nitroglycerin, trinitrotoluene (TNT) and cyclotrimethylenetrinitramine (RDX), as well as fertilizers such as ammonium nitrate. In 1918 Haber was awarded the Nobel Prize for the synthesis of ammonia from its elements. This wasn't the only honor he received during his life he had received many others and was recognized over the globe for what he had discovered. . After a grave illness, Haber died on January 29, 1934, at Basle, on his way from England to convalesce in Switzerland, his spirit broken by his rejection by the Germany he had served so well. Sources http://nobelprize.org/nobel_prizes/chemistry/laureates/1918/haber-bio.html http://en.wikipedia.org/wiki/Fritz_Haber http://en.wikipedia.org/wiki/Robert_Bunsen http://www.geocities.com/bioelectrochemistry/haber.htm ...read more.