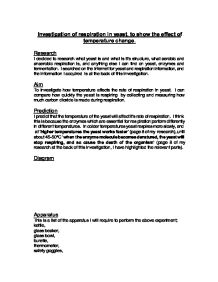 Investigation of respiration in yeast, to show the effect of temperature change.

I will use the average of the two results to plot my graph. Analyzing From my investigation, I have discovered that just as I predicted, the temperature affects the rate of yeast respiration. The yeast respired more quickly at higher temperatures, but if the temperature becomes too high, the enzymes essential for respiration in yeast become denatured, and this causes the organism ( in this case the yeast) to die. This is illustrated in the graph on the previous page. As you can see, the amount of carbon dioxide produced rises greatly between 30 and 40 degrees centigrade, but after 40 degrees C, the enzymes in the yeast become denatured. The graph shows this clearly, after 40 degrees, the line of best fit falls which shows that the amount of CO2 produced decreases severely, until it almost stops completely, this means respiration has stopped because respiring yeast produces CO2. This is because, the higher the temperature, the higher the energy level of the enzymes and substrate molecules or 'enzyme substrate complexes' (see research page 9). The more kinetic energy they have, the more they collide and the more reactions take place between them. The enzyme becomes denatured because the weak chemical bonds which hold the molecule in the specific shape for one substrate, are broken. The increase in molecular collisions and vibrations at higher temperatures, is enough to permanently change the shape of the 'active site' (see page 9 of research). ...read more.

2. The cork kept leaking at the sides of the test tube and where the tubing went into the test tube via the cork, perhaps to stop this occurring I needed to coat the cork in some kind of waterproof material, e.g plastic, wax, or some kind of water resistant jelly. 3. The bubbles caused by the yeast respiring kept blocking the tubing, which was stopping the CO2 from collecting properly. I had to keep unblocking the experiment by hand. To stop this occurring again, It would be useful to have a larger test tube, which would stop the bubbles reaching the tubing so soon. 4. The burette was not the most reliable of all equipment suitable for this task, a gas syringe would have been far more accurate to measure the amount of CO2 produced. However the burette is far more accurate than counting bubbles of CO2 or using a measuring cylinder, which is nowhere near accurate for the accuracy required in this experiment. If I wished to expand upon my experiment, I think it would be interesting to extend the enquiry to discover the exact point when all the yeast enzymes become denatured, and stop producing CO2 altogether. Another way to provide additional evidence for the conclusion would be to re-do the experiment, with the suggested improvements, and instead of increasing the temperature 5 degrees every time, I could increase it 1 degree at a time, and find the exact optimum temperature at which the yeast will respire more quickly at than any other temperature. ...read more.