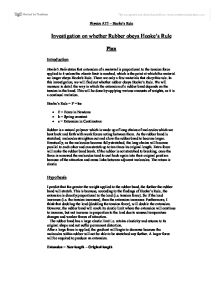 Hooke's Rule states that extension of a material is proportional to the tension force applied to it unless the elastic limit is reached, which is the point at which the material no longer obeys Hooke's Rule. There are only a few materials that obey this rule. In this investigation, we will find out whether rubber obeys Hooke’s Rule. We will measure in detail the way in which the extension of a rubber band depends on the tension in the band. This will be done by applying various amounts of weights, as it is a continual variation.

However if the experiment was to be carried out again changes could be made to reduce experimental error. A pointer on the rubber band would have helped in gathering the information more accurately. Also advanced equipment could be used to make the measurements even more accurate, for example an ultra sonic measuring device to measure the extension to a very accurate degree or a special laser. Computer technology could assist by creating graphs as the experiment is happening. Also a tensomometer may have been used as an accurate way of applying tension to the rubber. These improvements would increase the accuracy of the experiment vastly. Also more results could have been taken to increase the reliability of the evidence.

If the investigation was extended further, other variables in the experiment could be measured, for example, the temperature which could have been measured as it was observed in the preliminary work that the temperature of the rubber increases as the extension increases and this factor could be investigated more thoroughly. Also different materials could have been investigated, for example, plastic, metal etc. and the results of the extension of these materials will be compared with the findings of the extension of rubber. Therefore, it can be seen how different types of cross-linking and bonding between molecules affects the extension

The author has provided a good response to the question, as they have carried out a successful experiment to investigate the relationship between the stress applied to the rubber band and the extension, showing that the rubber band appears to ...

The author has provided a good response to the question, as they have carried out a successful experiment to investigate the relationship between the stress applied to the rubber band and the extension, showing that the rubber band appears to be following HookeÃ¢â‚¬â„¢s Law. They have also considered the science behind the experiment, including a good explanation of elasticity.

The author has analysed their results and compared them to the expected trend predicted in the hypothesis. However, there were many opportunities to extend their analysis slightly, for example using the gradient of their graph to calculate the Ã¢â‚¬Ëœspring constantÃ¢â‚¬â„¢ in the equation given in the hypothesis. They could also have calculated the uncertainties in their measurements and plotted uncertainty bars on the graph, and, if they had repeated their experiment more times, any anomalies in their results. These may be essential to gain high marks, and provide the opportunity to show good mathematical skills. Occasionally they have not shown a thorough understanding of the physics behind the experiment Ã¢â‚¬â€œ for example their explanation of the energy transfers when rubber is stretched is flawed. They need to think more logically about the molecules, in order to realise that the rubber gains elastic potential energy as the intermolecular bonds/ cross-links are stretched. The energy is not used to increase the temperature (although a slight increase in temperature could be due to friction as the molecules slide past each other), and the work done is only to pull the molecules in order to stretch the bonds. Less force could be required to produce a relatively larger extension due to the intermolecular bonds breaking/ weakening after a certain stress has been applied. They have also conflated the terms Ã¢â‚¬Ëœelastic limitÃ¢â‚¬â„¢ and Ã¢â‚¬Ëœlimit of proportionalityÃ¢â‚¬â„¢ Ã¢â‚¬â€œ the latter is the point after which the material stops obeying HookeÃ¢â‚¬â„¢s Law, whereas the elastic limit is the point beyond which the material stops behaving elastically i.e. undergoes permanent deformation under stress. Despite these small mistakes, they have analysed their results well and used them to support their conclusion.

Their quality of written communication is good, with no obvious spelling or grammatical mistakes. However, they could present their work better by including more clear headings to break up the text and show to the marker that they can do an Ã¢â‚¬ËœanalysisÃ¢â‚¬â„¢ of their Ã¢â‚¬ËœresultsÃ¢â‚¬â„¢ and come to a Ã¢â‚¬ËœconclusionÃ¢â‚¬â„¢. They also occasionally use more colloquial language such as Ã¢â‚¬Ëœloads of varied massesÃ¢â‚¬â„¢, which could be better expressed as Ã¢â‚¬Ëœa variety of masses ranging from 100g to 1000g, increasing in 100g amountsÃ¢â‚¬â„¢ Ã¢â‚¬â€œ this is a bit clearer and less informal. However, the majority of their report is very well done, with only minor problems in the layout.