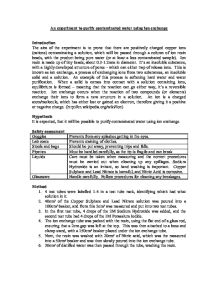 An experiment to purify contaminated water using ion exchange Introduction The aim of the experiment is to prove that there are positively charged copper ions (cations) contaminating a solution, which will be passed through a column of ion resin beads, with the product being pure water (or at least a less contaminated sample). Ion resin is made up of tiny beads, about 0.3-1.2mm in diameter. It's an insoluble substance, with a highly developed structure of pores - which can either trap of release ions. This is known as ion exchange, a process of exchanging ions from two substances, an insoluble solid and a solution. An example of this process is softening hard water and water purification. When a solid is comes into contact with a solution containing ions, equilibrium is formed - meaning that the reaction can go either way, it's a reversible reaction. Ion exchange occurs when the reaction of two compounds (or elements) exchange their ions to form a new structure in a solution. An ion is a charged atom/molecule, which has either lost or gained an electron, therefore giving it a positive or negative charge. ...read more.

The reasons, to suspect that the water was contaminated, were that it was coloured. At the first test at the start involving the sodium hydroxide, the observations recorded were that it was gelatinous - with a blue precipitate. The gelatinous product in the test tube shows that copper is present. The white product is lead sulphate. The following equation shows that they had 'swapped partners': sodium + copper � sodium + sulphate. From the results of the experiment, it was apparent that the when the Sodium Hydroxide was added to the Lead Nitrate and Copper Sulphate solution, it wasn't able to dissolve, this gave an end result in the first test tube having a concentrated and chalky result. This is because hydroxides are insoluble in water, meaning it is unable to dissolve in water. (http://www.chemguide.co.uk/inorganic/group2/solubility.html). The second experiment involved the solution being run through the ion resin beads. The ion resin beads were used to remove the hard metals, and instead it purifies and softens the solution. The hard metals in the experiment were lead and copper. When they were passed through the resin, the nitrate and sulphate passed through and released the hydrogen ions. Reference: http://genchem.chem.wisc.edu/lab/CCA/STHTM/NAOH/NAOHCUS2.HTM http://www.chemguide.co.uk/inorganic/group2/solubility.html http://www.wikipidea.co.uk ...read more.