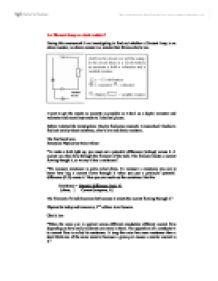 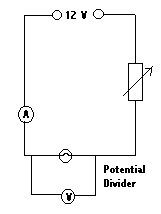 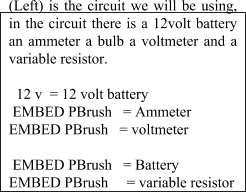 I want to get the results as accurate as possible so I shall us a digital ammeter and voltmeter and record my results to 2 decimal places.

Before I started the investigation I had to find some research. I researched 3 books to find out mainly about resistance, ohm’s law and ohmic resistors.

The first book was: -

“To make a bulb light up, you must out a potential difference (voltage) across it. A current can then flow through the filament of the bulb. The filament resists a current flowing though it, so we say it has a resistance”.

“We measure resistance in units called ohms. To measure a resistance you nee to know how big a current flows through it when you put a particular potential difference (P.D) across it. Then you can work out the resistance like this:

The filament of a bulb becomes hot because it resists the current flowing through it.”

“When the same p.d. is applied across different conductors different current flow depending on how easily electrons can more in them.

1 The first crocodile clip is clipped to the wire at the 0cm position on the metre rule.

3.The power supply is turned on. The voltage and current are then read off the ammeter and voltmeter, and recorded.

4.The power supply is then turned off and the second crocodile clip is moved to the next position.

The above steps are completed for each length and then the entire investigation is repeated for accuracy. I will also use digital ammeters and voltmeters for accuracy.

I set out my apparatus as shown;

But we did not include the variable resistor at first. We placed a thin copper wire along

Having performed the investigation, the following conclusion were drawn:

As predicted, an increase in length resulted in an increased resistance

If thought that Ohm’s Law applies, and then another possible explanation could be that at some points properly in the lower lengths, the wire was not allowed to cool completely so that the temperature was higher for that measurement. Whilst unlikely this would cause a higher resistance as explained previously. However, it is now known, after researching the metal alloy “constantan,” that the resistivity which is the electrical resistance of a conductor of particular area and length of this alloy is not affected by temperature. So, in these experiments Ohm’s Law does not apply.