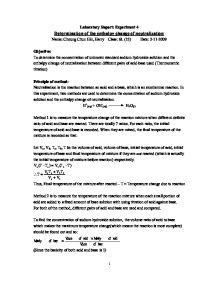 However, method 2 is more suitable to determine the concentration of sodium hydroxide solution since the number of times of measuring the temperature of solution was much more than that in method 1. Then the peak of the graph can be found out more accurately. Thus the volume of acid used with the highest temperature change can be more accurate. Based on the results of this experiment, the enthalpy change of neutralization was more negative with weaker acids, having same base. However, this statement was obviously wrong since in weaker acids, some energy was used to ionize the acid molecules. Theoretically, the enthalpy change of neutralization should be more negative with stronger acids. This was not shown on the results in this experiment since the error was too large. Conclusion: The concentration of the sodium hydroxide solution was successively found out and it was acceptable, but the enthalpy of neutralization found out was not reliable since it was not consistent and it contradicted to the theoretical values. On the whole, the results was not acceptable and so the objective of this experiment was not fulfilled. Reference: http://en.wikipedia.org/wiki/Styrofoam http://en.wikipedia.org/wiki/polystyrene - End of Report - ?? ?? ?? ?? 1 ...read more.