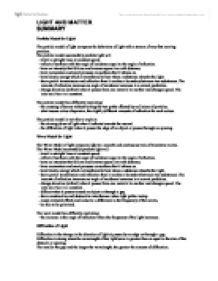 The particle model of light compares the behaviour of light with a stream of very fast moving particles.

- have an intensity that follows and inverse square law with distance.

- have momentum and exert pressure on surfaces that it shines on.

- have kinetic energy which is transferred to heat when a substance absorbs the light.

- show partial transmission and reflection then it reaches a boundary between two substances. The

amount of reflection increases as angle of incidence increases is a correct prediction.

- change direction (refract) when it passes from one material to another and changes speed. The

The particle model has difficulty explaining:

- the crossing of beams without having the two paths affected by collisions of particles.

- what causes colour dispersion, the slightly different amounts of refraction for each colour.

The particle model is not able to explain:

- the slowing down of light when it refracts towards the normal.

- diffract when it passes around an object or through a gap.

- cause coloured effects and is due to a difference in the frequency of the waves.

- be able to be polarized.

The wave model has difficulty explaining:

- the increase in the angle of refraction when the frequency of the light increases.

Diffraction is the change in the direction of light at passes by an edge or through a gap.

Diffraction is strong when the wavelength of the light/wave is greater than or equal to the size of the obstacle or opening.

The smaller the gap and the longer the wavelength, the greater the amount of diffraction.

When light with the same wavelength and phase passes through a double slit and falls on a screen, a series of noses and antinodes are seen.

The longer the wavelength, the closer the slits and the greater distance to the screen, the further apart are the nodes and antinodes.

When EM waves with a high

Shining the complete spectrum of light onto a sample of a substance will result in some of the photons absorbed and removed from the spectrum. This results in a dark line in the absorption spectrum.

One nanometre is equal to ten to the minus nine metres.

The energy of a photon in eV is equal to 1240 divided by its wavelength in nanometres.

Motion of charges in Electric fields

The electric force on a charged particle in an electric field is equal to the field strength times the size of its charge.

The charged particle follows a parabolic path between the plates.