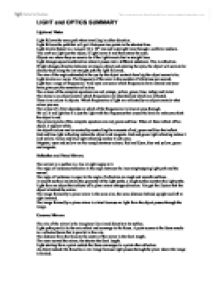 Light follows the same path when travelling in either direction.

Light follows the path that will get it between two points in the shortest time.

Light travels fastest in a vacuum 3.0 x 108 m/s and in straight lines through a uniform medium.

You can't see light just the object, if light leaves it and then enters the eyes.

Objects are where they are seen to be if the light travels fast in straight lines.

Light changes speed and direction when it passes into a different substance. This is refraction.

If light changes direction between leaving an object and entering the eyes, the object will seem to be directly back along the last straight path the light followed.

The size of the angle subtended at the eye by the object controls how big the object seems to be.

Light travels as a wave. The frequency of the wave is the number of vibrations per second.

Light has a range of frequencies  Your eyes can sense which frequencies have entered and your brain gives you the sensation of colour.

The colours of the complete spectrum are red, orange, yellow, green, blue, indigo and violet.

The atoms in an object control which frequencies are absorbed and which are reflected.

An object inside the focus has a virtual image because light does not pass through the place where the image is formed. Reflected light seems to have come from behind the mirror in straight lines.

Virtual  images formed by concave mirrors are upright, enlarged and seem to be behind the mirror.

Used as the collector of light in big telescopes or by a dentist as a magnifier or a tooth.

Light paths parallel to the axis reflect and diverge as if all coming from a point behind the mirror - the focus.

The distance from the focus to the centre of the mirror is the focal length.

The more curved the mirror, the shorter the focal length.

All objects regardless of distance have images that are virtual, upright, diminished that form behind the mirror between the mirror and the focus.

If the object is at infinity - a few metres, the image is formed at the focus.

Used where vision is restricted - the image seen in the mirror is of a wide area infront of the mirror.

The shorter the focal length of the lens, the wider the field of view.

The depth of field is the distance between the objects closest and furthest from the camera that are in acceptable focus for one position of the lens.

The exposure time is the time the image falls on the film while the shutter is open.

The ASA of a film is 1 over the exposure time needed to take a good picture in bright sunshine when the focal ratio is 16.

The bigger the ASA rating of a film, the less light is needed to take a good picture.

Films and prints have layers sensitive to red, green and blue light.

After developing the film or print, coloured dyes appear in the layers where these types of light were absorbed.

The colour that appears on the negative is the complimentary colour in the original scene.