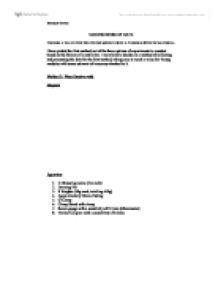 Making sense of data - finding a value for the young modulus of a flexxible strip of material.

MAKING SENSE OF DATA FINDING A VALUE FOR THE YOUNG MODULUS OF A FLEXIBLE STRIP OF MATERIAL I have picked the first method out of the three options of experiments to conduct based on the flexion of a cantilever. I now have to decide on a method of collecting and processing the data for the first method, taking care to reach a value for Young modulus with some estimate of accuracy attached to it. Method 1: Wood (metre rule) Diagram Apparatus 1. 2 Measuring rulers (1m each) 2. Drawing Pin 3. 9 Weights (50g each, totalling 450g) 4. Approximately 50cm of string 5. G-Clamp 6. Clamp Stand with clamp 7. Screw gauge with a sensitivity of 0.1mm (Micrometer) 8. Vernier Calipers with a sensitivity of 0.2mm The Micrometer Vernier Calipers - read the sliding scale along the top and bottom Variables The variables that will be kept constant are the length of the overhang of the ruler, the position where the ruler is clamped and the position on the ruler where the weights are hung. The only variable that will change during the experiment is the amount of weight that is hung on one end of the ruler to measure the different deflection of the ruler at different heights. ...read more.

Screw gauge used had a zero error of -0.01mm and it had a sensitivity of 0.1mm. Vernier calipers used had a sensitivity of 0.2mm. The experiment was carried out as accurately as I could and according to my result and the graph I think that there were no anomalous results in my experiment. Throughout the experiment the same apparatus was used even for the repetitions. The only thing that varied during the repetitions was that I used different sides on the ruler to check that the deflections at each side were almost the same. The method used for the above experiment was quite reliable. As the apparatus used were the same throughout the experiment. To improve the method by which I carried out my experiment will be to use a screw gauge, which does not have a zero error. Fix a point on one end of the ruler for the weights to be hung so that there are no errors while reading the deflection of the ruler. Use a fixed length for the overhang. Initially see that the ruler does not have bend, if it does use a similar ruler with the same amount of bend length to place it next to the ruler on which weights are hung to get an accurate reading for the deflection. Khushpal Grewal ...read more.