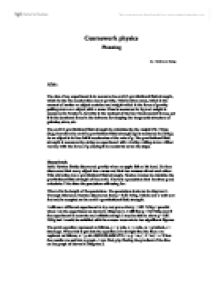 The aim of my experiment is to measure the earth’s gravitational field strength, which is also the acceleration due to gravity. This involves mass, which is the amount of matter an object contains and weight which is the force of gravity pulling down on a object with a mass. Mass is measured in Kg and weight is measured in Newton’s. Gravity is the weakest of the four fundamental forces, yet it is the dominant force in the universe for shaping the large scale structure of galaxies, stars, etc.

Hypothesis
Isaac Newton firstly discovered gravity when an apple fell on his head. He then discovered that every object has a mass and that two masses attract each other. This attraction has a gravitational field strength, Newton wanted to calculate the gravitational field strength of the earth. There is a pendulum that involves g and calculates T the time the pendulum will swing for.

Normal Force, Fnorm
The normal force is the support force exerted upon an object which is in contact with another stable object. For example, if a book is resting upon a surface, then the surface is exerting an upward force upon the book in order to support the weight of the book. On occasions, a normal force is exerted horizontally between two objects which are in contact with each other.

Friction Force, Ffrict
The friction force is the force exerted by a surface as an object moves across it or makes an effort to move across it. The friction force opposes the motion of the object. For example, if a book moves across the surface of a desk, then the desk exerts a friction force in the opposite direction of its motion. Friction results from the two surfaces being pressed together closely, causing intermolecular attractive forces between molecules of different surfaces. As such, friction depends upon the nature of the two surfaces and upon the degree to which they are pressed together.

Implementation
I will use the following apparatus in my experiment to find "g":

A wooden trolley- the trolley will be able to roll down the runway with a negligible amount of friction acting upon it as it rolls down.

If there was an occurrence that would cause a incorrect result such as the trolley hitting the side of the runway, I would do the run again and ignore the results I got from the run that hit the side of the runway, as the increase in friction from the trolley hitting the side would cause the velocity of the trolley to significantly decrease. I also made sure that the picket fence was fully cutting the light gate beam each run so the reading on the data logger would be accurate. The apparatus I use was the same through out the whole experiment to keep things like the mass and friction of the trolley upon the runway.

The factor of safety is very important in every experiment. Unsafe experiments tend to be inaccurate so fully meeting all of the safety requirements increases the accuracy of the experiment. In this particular experiment I found there to be a few safety factors that needed to be taken into consideration as well as the safety rules of the laboratory. The first safety factor I found was the angle of the runway. I decided that the angle of the runway should be kept fairly small because I wanted to limit the speed of the trolley as it rolled down the runway so it wouldn´t travel to fast. This is important because at the bottom end of the runway the trolley had to be caught by hand, if it was travelling to fast the person stopping it may be injured.