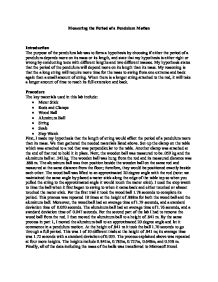 The purpose of the pendulum lab was to form a hypothesis by choosing if either the period of a pendulum depends more on its mass or its length, and state that my hypothesis is either right or wrong by conducting tests with different lengths and two different masses. My hypothesis states that the period of the pendulum will depend more on its length than its mass. My reasoning is that the a long string will require more time for the mass to swing from one extreme and back again than a small amount of string. When there is a longer string attached to the rod, it will take a longer amount of time to reach its full extension and back.

The key materials used in this lab include:

First, I made my hypothesis that the length of string would affect the period of a pendulum more than its mass. We than gathered the needed materials listed above. Set-up the clamp on the table which was attached to a rod that was perpendicular to the table. Another clamp was attached at the end of that rod to hold it in place. Next, the wooden ball was measured to be .059 kg and the aluminum ball at .242 kg. The wooden ball was hung from the rod and its measured distance was .888 m. The aluminum ball was then position beside the wooden ball on the same rod and measured at the same distance from the floor; therefore, they would be positioned exactly beside each other. The wood ball was lifted to an approximated 20 degree angle with the rod (note: we maintained the same angle by placed a meter stick along the edge of the table top so when you pulled the string to the approximated angle it would touch the meter stick). I used the stop watch to time the ball when it first began to swing to when it came back and either touched or almost touched the meter stick. For the first trial it took the wood ball 1.78 seconds to complete its period. This process was repeated 10 times at the height of .888m for both the wood ball and the aluminum ball. Moreover, the wood ball had an average time of 1.79 seconds, and a standard deviation time of  0.050 seconds. The aluminum ball had an average time of 1.76 seconds, and a standard deviation time of  0.047 seconds. For the second part of the lab I had to remove the wood ball from the rod. I than moved the aluminum ball to a height of .841 m. By the same process in part 1, I moved the aluminum ball to an approximated 20 degree angle and let it commence in a pendulum motion. At the height of .841 m it took the ball 1.70 seconds to go through a full period. This was 1 of 10 different trials at the height of .841 m; its average time was 1.72 seconds with a standard deviation of 0.035. The process explained above was repeated at four more heights. The heights include 0.841m, 0.783m, 0.727m, 0.648m, and 0.558 m. Finally, all of the data including the mass of the balls was transferred to Microsoft Excel.