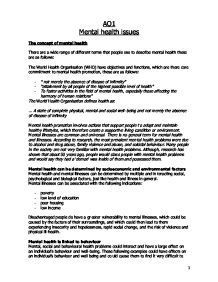 AO1 Mental health issues The concept of mental health There are a wide range of different terms that people use to describe mental health these are as follows: The World Health Organisation (WHO) have objectives and functions, which are there core commitment to mental health promotion, these are as follows: - " not merely the absence of disease of infirmity" - "attainment by all people of the highest possible level of health" - To foster activities in the field of mental health, especially those affecting the harmony of human relations" The World Health Organisation defines health as: ... A state of complete physical, mental and social well-being and not merely the absence of disease of infirmity Mental health promotion involves actions that support people to adopt and maintain healthy lifestyles, which therefore create a supportive living condition or environment. Mental illnesses are common and universal. There is no general term for mental health and illnesses. According to research, the most prevalent mental health problems were due to alcohol and drug abuse, family violence and abuse, and suicidal behaviour. Many people in the society are not very familiar with mental health problems. Although, research has shown that about 50 years ago, people would class people with mental health problems and would say they had a 'demon' was inside of them and possessed them. Mental health can be determined by socioeconomic and environmental factors Mental health and mental illnesses can be determined by multiple and interacting social, psychological and biological factors, just like health and illness in general. Mental illnesses can be associated with the following indications: - poverty - low level of education - poor housing - low income Disadvantaged people do have a greater vulnerability to mental illnesses, which could be caused by the factors of their surroundings, and which could then lead to them experiencing insecurity and hopelessness, rapid social change, and the risk of violence and physical ill-health. ...read more.

Diagnostics There is no singular test that can definitively diagnose Alzheimer's disease, although imaging technology designed to detect Alzheimer's plaques and tangles is rapidly becoming more powerful and precise. Still, a comprehensive, competent diagnostic workup by a skilled physician can pinpoint the cause of Alzheimer's-like symptoms with over 90% accuracy. Diagnosis of Alzheimer's disease can include the following: - Medical history -- This should include questions about past illnesses, prior injuries and surgeries, and current chronic conditions in order to identify other possible causes for Alzheimer's-like symptoms. For instance, if you suffered a serious head injury any time in your past, it could account for the problems with memory or concentration that you're currently experiencing. If you're loved one has heart disease that could be reducing blood flow to the brain and causing forgetfulness. - Medication history -- This should include allergies, experienced side effects from past medications, and a list of current medications and dosages. Not only will this inform any future prescription decisions; it also might reveal a medication interaction or over dosage that accounts for you or your loved one's confusion and other symptoms. - Mood evaluation -- The evaluation should include an assessment for anxiety or depression, which can create Alzheimer's-like symptoms in older people as well as occur concurrently with Alzheimer's or another dementia. Depression, in particular, can result in a set of symptoms collectively known as pseudodementia. If a mood disorder is detected, it can be treated alongside other disorders, such as Alzheimer's. - Mental status exam -- To assess memory, concentration, and other cognitive skills. The mental status exam is a research-based set of questions that results in a score that indicates a general level of impairment. If you or your loved one scores high on a mental status exam, there is less of a chance that Alzheimer's is the culprit; another (possibly treatable) condition may be responsible for the symptoms. ...read more.

In the 1960's the waif-like look became popularized by the supermodel Twiggy Lawson. This was the first time in history that an underweight women became the standard for the ideal body image. In the 1970's singer Karen Carpenter began her battle with anorexia nervosa. She died in 1983 from heart failure related to the disease. America began to pay more attention to eating disorders after this unfortunate loss. Here is a picture of the before and after stages of Karen Carpenter, below. There was a research on women's magazines for the number of diet and weight articles they contained. It seemed that the trend in the 1980's showed from their results, was to become even thinner and more tubular shaped. In this context, tubular shaped means that women's bust and hips were decreasing as their height was increasing. There is a cultural expectation for women bodies to be ultra thin. Hence, magazines sending out different messages that emphasize exercise and fitness in addition to dieting. There was a study that was conducted in 1992, and today these trends continue even more. Not only are "ideal" women supposed to be ridiculously underweight, but they are also supposed to be physically fit and toned without being too muscular. The picture on the right illustrates how the female image ideal of this time was extremely thin and toned and this was being portrayed to "normal people". On the right is the cover of the May issue for Harper's Bazaar magazine (2002), which looks very similar to the 1988 cosmopolitan cover. Both models are very thin, toned and have very little fat on their bodied. On the left is a image of what models tend to look like today. It illustrates just how thin the body "ideal" for women has become. Due to the media surrounding women with so many images like these our culture has accepted this body type to be 'ideal', it makes sense that most women feel that their bodies are inadequate because they are basing their comparisons to these super slender body images that they come in contact with every day. ...read more.

Overall, this is a very substantial piece of work looking at the highly complex and diverse subject of mental health. It requires considerable courage to take the topic on in this way and the writer is to be complimented on a well-structured account with a good choice of case-studies.

In general, the writing was fluent and the text easy to follow. In places, a number of grammatical errors caused some confusion. In addition, a number of images were used which appeared to have no obvious function.

The writer clearly has a particular interest in the impact of the media on the development of eating disorders in young people. This section displayed a good mix of fact and opinion. moreover, the writer was sufficiently moved by the topic to write a conclusion. Earlier sections of the assignment would have benefited from summaries or conclusions, helping the reader to focus their own thoughts.