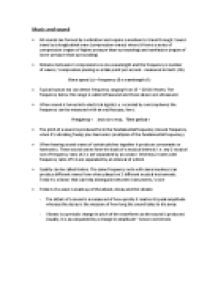 Distance between 2 compressions is one wavelength and the frequency is number of waves / compression passing a certain point per second - measured in Hertz (Hz).

Typical human ear can detect frequency ranging from 15 – 20000 Hearts. The frequency below this range is called infrasound and those above are ultrasound.

When sound is turned into electrical signal (i.e. recorded by a microphone) the frequency can be measured with an oscilloscope, here:

Quality can be called timbre. The same frequency note with same loudness can produce different waves form when played on 2 different musical instruments. Timbre is a factor that can help distinguish between instruments / voice.

Timbre of a wave is made up of the attack, decay and the vibrato:

The attack of a sound is a measured of how quickly it reaches its peak amplitude whereas the decay is the measure of how long the sound takes to die away.

Vibrato is a periodic change in pitch of the waveforms as the sound is produced.

A motor rotates the disc at between 200 to 500 revolutions per minute, the reason for this range of spins per minute is so that the laser can pick up data at the same rate whether the beam is scanning near the centre (moving quickly) or scanning at the outer part (moving less quickly)

DVDs have a much higher capacity for storing music than CDs – due to DVDs having tighter spirals, shorter bumps and a more efficient tracking system.

Also, DVDs often has two layers, where the laser can pass through the first one to the second layer, this increases the capacity even further.

All EM waves have the following properties:

All have ability to reflect, refract (change in direction of light due to passing from one medium to another), diffract (interference of light due to bending around objects) and interfere.

They travel at the same speed of 3 x 108 m/s in a vacuum. They are not affected by the electric or magnetic field.

All follows the inverse square law (when there’s no absorption of waves). They all consists of a vary electric and magnetic field vibrating at right angle of each other and the direction of travel – meaning EM waves can be polarized.

There are overlaps in wavelength and frequency in the EM spectrum, we can distinguish a wave for how it’s produced. Radio and sometimes microwaves can be used to transmit and receive information without connecting wires / fibres.

hf < φ, photon has insufficient energy to liberate an electron.

hf > φ, There’s extra energy after the liberation of electron, this become kinetic energy of electron.

Work function is small energies with units of electron-volt (eV). This is the energy gained by an electron accelerate thorough a potential difference of 1 volt.

According to wave theory, weak radiation should lead to electron being liberated after a sufficient amount of energy is gained after a long time - since energy would arrive continually at the zinc plate as a wave. However in reality provided frequency is high enough, electron emission occurs almost instantly.

There is no such delay in the emission of electrons.

Light is said to show wave - particle duality. In wave theory, energy is proportional to the square of the amplitude (E ∝ A2) - this is the intensity of the wave. So in Young’s experiment, the wave property of light is used to predict the amplitude of the wave arriving at a point on the screen.

Energy arriving per second is related to the E ∝ A2, as this can only be detected as         photons, A2 is proportional to the number / chance of photon arriving at a point per         second. So if there are lots of photon, more is detected here amplitude is greatest.