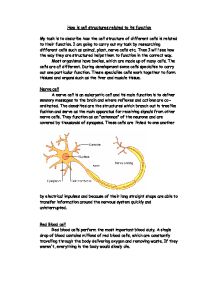 My task is to describe how the cell structure of different cells is related to their function. I am going to carry out my task by researching different cells such as animal, plant, nerve cells etc.

How is cell structures related to its function My task is to describe how the cell structure of different cells is related to their function. I am going to carry out my task by researching different cells such as animal, plant, nerve cells etc. Then I will see how the way they are structured helps them to function in the correct way. Most organisms have bodies, which are made up of many cells. The cells are all different. During development some cells specialise to carry out one particular function. These specialise cells work together to form tissues and organs such as the liver and muscle tissue. Nerve cell A nerve cell is an eukaryotic cell and its main function is to deliver sensory messages to the brain and where reflexes and actions are co-ordinated. The dendrites are the structures which branch out in treelike fashion and serve as the main apparatus for receiving signals from other nerve cells. ...read more.

The structure of these cells is a flying disk shaped like a donut, this is so maximum haemoglobin can be carried allowing maximum amount of oxygen to be transported. Plant cell and Animal Cell There are two types of cells: prokaryotic cells and eukaryotic cells. The simplest cells are prokaryotic cells like bacteria. Eukaryotic cells are more complex and are found in plants, animals and fungi. A plant cell is made up in a similar way to animal cell but also has it differences so it can perform its particular functions. The shape form and content of individual cells show much variation. The structural characteristics of a particular cell are closely related to its function. Plant cells The cells of plants, like fungi have outer cell walls made from tough fibres of cellulose surrounded by a matrix of other polysaccharides this is in addition to the already present cell membrane, this cell wall is used for protection and to keep the cell rigid. ...read more.

Smooth muscles are involuntary (i.e., they cannot be controlled freely). Their cells have a variable length. Smooth muscles are found in the digestive system, in the wall of the trachea, uterus, and bladder. The contraction of smooth muscle is controlled from the brain through the nervous-system. Striated muscles, are also called skeletal muscles because of their basic location, are formed from a large number of muscle fibres. Each fibre forms a (muscle) cell and are distinguished by the presence of alternating dark and light bands. Cardiac muscle is also striated, but differs in other ways from skeletal muscle: Not only is it involuntary, but also when excited, it generates a much longer electric impulse than does skeletal muscle, lasting about 300 ms. Correspondingly, the mechanical contraction also lasts longer. Furthermore, cardiac muscle has a special property: The electric activity of one muscle cell spreads to all other surrounding muscle cells, owing to an elaborate system of intercellular junctions. Cardiac muscles: centrally located nuclei, muscle cells are branched and the present of intercalated discs. ...read more.

A very good summary of some of the specialised cells. Diagrams that are included are mostly well labelled and used. Would be good to include more specialised such as an egg and sperm. But what is written is very good.
4 stars.