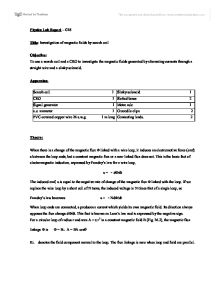 Objective: To use a search coil and a CRO to investigate the magnetic fields generated by alternating currents through a straight wire and a slinky solenoid.

To use a search coil and a CRO to investigate the magnetic fields generated by alternating currents through a straight wire and a slinky solenoid.

When there is a change of the magnetic flux Φ linked with a wire loop, it induces an electromotive force (emf) ε between the loop ends, but a constant magnetic flux or a non-linked flux does not. This is the basic fact of electromagnetic induction, expressed by Faraday’s law for a wire loop,

The induced emf, ε is equal to the negative rate of change of the magnetic flux Φ linked with the loop. If we replace the wire loop by a short coil of N turns, the induced voltage is N times that of a single loop, so Faraday’s law becomes                   ε = －NdΦ/dt

When loop ends are connected, ε produces a current which yields its own magnetic field. Its direction always opposes the flux change dΦ/dt. This fact is known as Lenz’s law and is expressed by the negative sign. 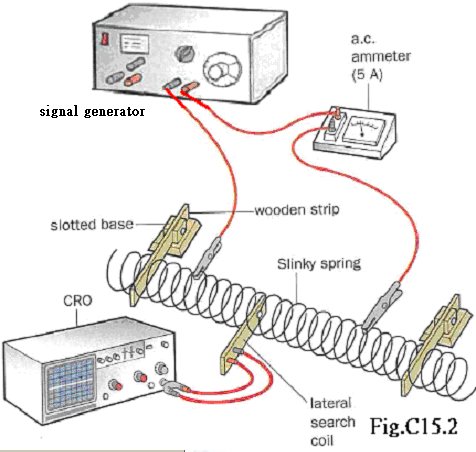 13. Step 12 was repeated with placing the search coil at the end of the solenoid, across its cross-section and along its length.

14. The search coil was placed at the centre of the solenoid again. The time base of the CRO was switched off. The length of the vertical trace shown on the CRO was recorded, which represents the induced peak-to-peak e.m.f.(V) in the search coil and also the magnetic field around the solenoid.

15. Step 14 was repeated with the other values of currents (I) from the signal generator in steps of 0.1A. The results were tabulated.

17. Step 14 was repeated with the other stretched lengths (l) of the solenoid. The space between coils must be even. The results were tabulated.

18. A graph of the induced e.m.f.(V) against the reciprocal of the stretched length of the solenoid(1/l ) was plotted.

A. Magnetic field around straight wire 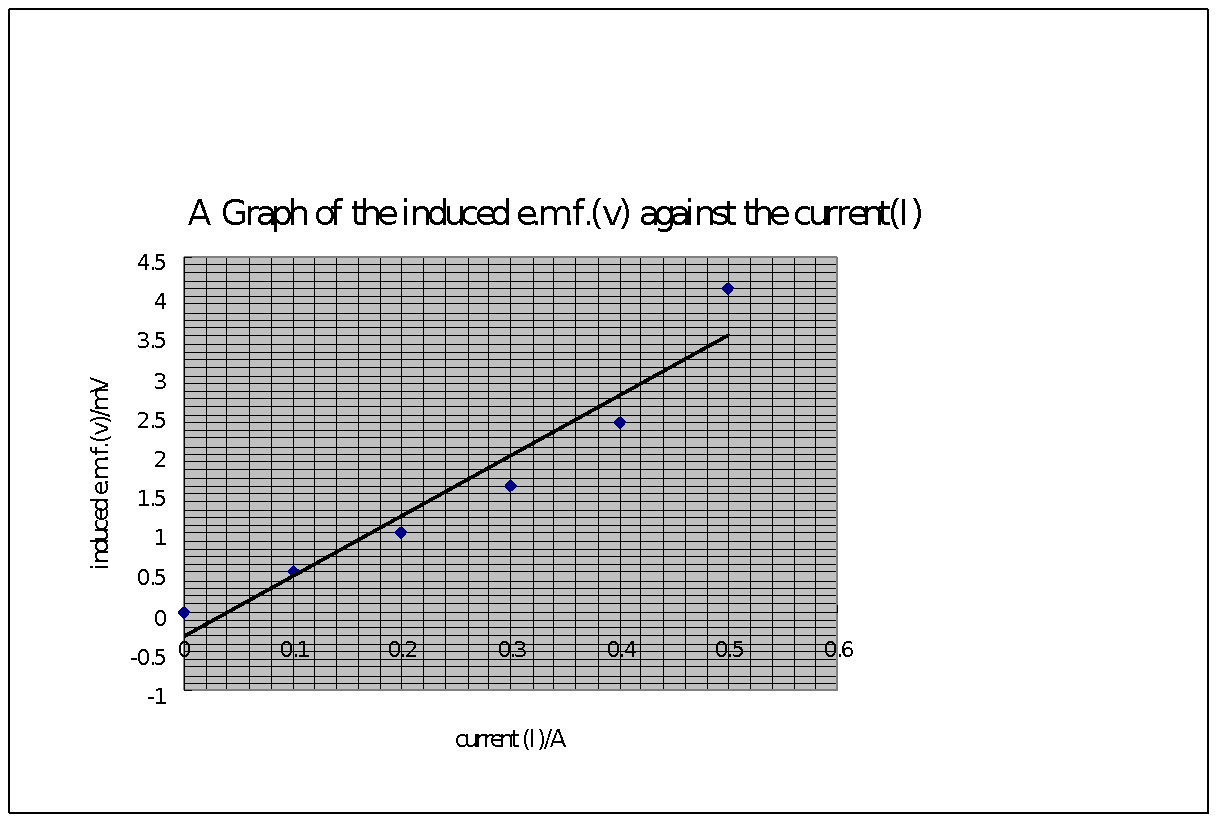 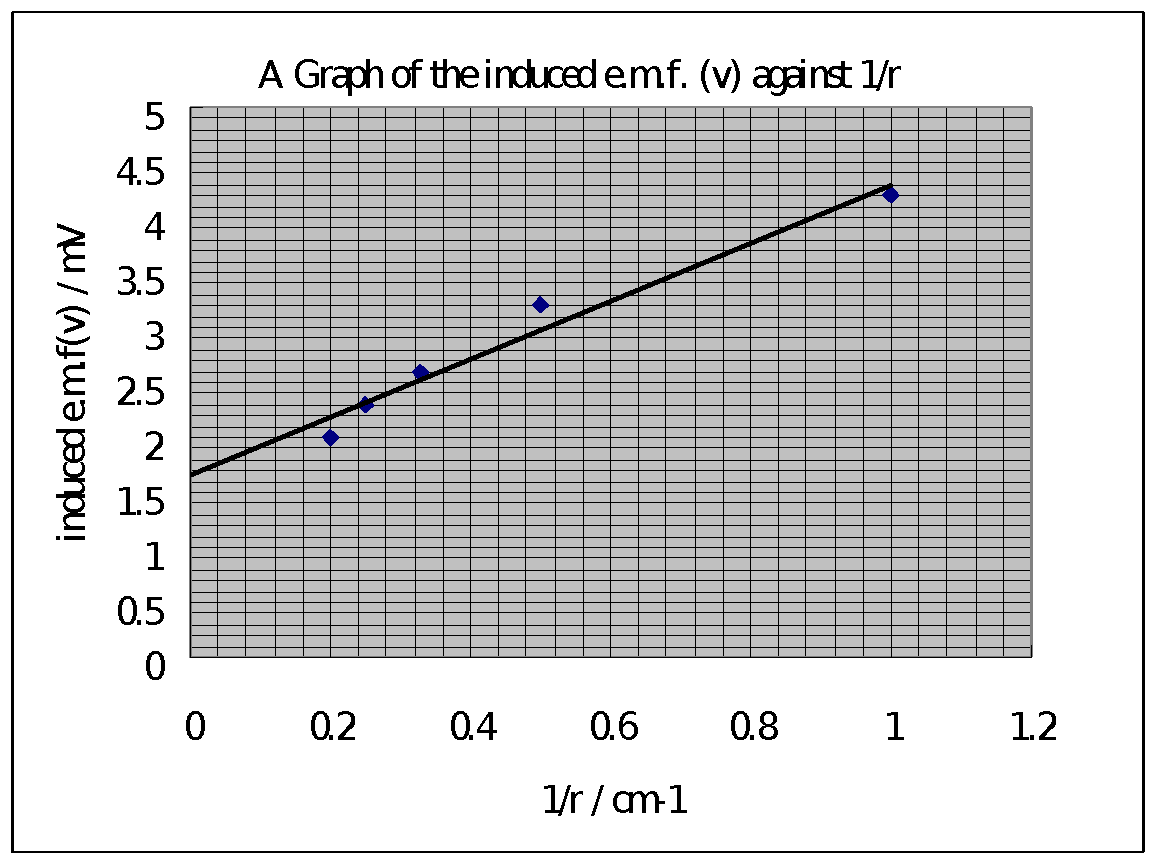 The sensitivity of the search coil can be increased by increasing the frequency.

B. Magnetic field around slinky solenoid

When placing the search coil at the centre of the solenoid, across its cross-section, the induced e.m.f. shown on the CRO, i.e. the length of the vertical trace is the maximum, that means the magnetic field of the straight wire is the maximum.

When placing the search coil along the length of the solenoid, the induced e.m.f. shown on the CRO is quite uniform except near its two ends.

To avoid disturbance, the set-up should be significantly distant from the return leads and other apparatus. The space between coils is nearly even. The search coil is nearly at right angles to the straight wire and the solenoid Therefore, the experiment can be improved.

5.   Reason for the sensitivity of the search coil can be increased by increasing the frequency.

First of all, the search coil detects a varying B-field through the current induced in it which is:

From the deduction, we can see that with A and B0 held constant, which are the area of search coil and the peak value of the varying B-field respectively, the rate of change of magnetic flux Φ increases with increasing ω which is the angular frequency with value 2πf, where f is the frequency of the B-field.

6. The Earth’s field can be ignored because it is a steady magnetic field.