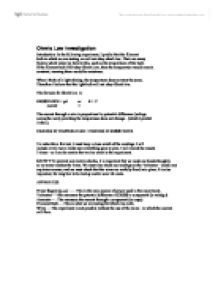 Introduction: In the following experiment, I predict that the filament

bulb in which we are testing, on will not obey ohm's law. Their are many

factors which make me believe this, such as the temperature of the bulb.

If the filament bulb DID obey Ohm's Law, then the temperature would remain

constant, meaning there would be resistance.

When I think of a light shining, the temperature does not stay the same.

Therefore I believe that the light bulb will not obey Ohm's law.

The formula for Ohm's law  is:

The current through a wire is proportional to potential difference (voltage

CHANGE IN TEMPERATURE = CHANGE IN RESISTANCE

so no water reaches the wires. We must also check our readings on the Voltmeter - incase any

explosion occurs, and we must check that the wires are carfully fixed in to place. It is also

important, for long hair to be tied up and to wear lab coats.

Power Supply (p.s.u) ----- This is the main source of power used in the experiment.

Voltmeter --- this measures the potential difference ACROSS a component (in volts)p.d

Ammeter ---  The measures the current through a component (in amps)

Filament Bulb --- This is what we are testing for Ohm's law with.

We set up the circuit shown in the diagram above.

that it did not obey Ohm's law. I know about Ohm's law from the theory:

A CURRENT THROUGH I WIRE IS PROPORTIONAL TO POTENTIAL DIFFERENCE ACROSS THE WIRE, PROVIDING THE TEMPERATURE REMAINS

I think the results were overall accurate. We did repeat them twice aswell as including the trail run; but we still could have

anomalous results. I think the safety was good and it overall went well - maybe a lack of detail. I think the conclusion is reliable.

To help us on Ohm's law, we could have included more tests on other things for Ohm's law as a simalar investigation - but I was overall