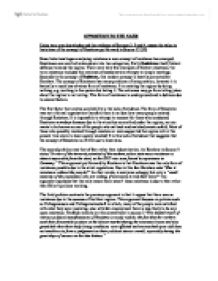 Opposition to thhe Nazis - Using your own knowledge and the evidence of Sources 2, 3 and 4, assess the value to historians of the concept of Resistenz put forward in Source 1?

OPPOSITION TO THE NAZIS

Using your own knowledge and the evidence of Sources 2, 3 and 4, assess the value to historians of the concept of Resistenz put forward in Source 1? (10)

Since historians began analysing resistance a new concept of resistance has emerged. Resistance can now be broken down into two categories, firstly Resistance itself, blatant defiance towards the regime. There were very few examples of blatant resistance; the term resistance includes the extremes of assassination attempts to simple meetings. Secondly is the concept of Resistenz, this modern concept is heavily promoted by Kershaw. The concept of Resistenz has many problems of interpretation; however it is basically a much less obvious form of resistance. It is resisting the regime by doing nothing, e.g. working in the system but hating it. The extremes may go from telling jokes about the regime to not voting. This form of resistance is underground and is dubious due to several factors.

The first factor that creates unreliability is the lack of evidence. The form of Resistenz was not a formal organisation therefore there is no idea how many people resisted through Resistenz. It is impossible to attempt to account

The limited reach of various political manifestations of Resistenz is easily visible; the fact that the workers used their favourable position in the labour market during the economic boom and also grumbled when their daily living conditions were affected and encroached upon still does not enable us to form a judgement on their political stance overall, especially during the great days of success in the late thirties.”

This source basically means that due to the resistances limited capabilities, and their living improvements, their quarrels was mere “grumbling” over small insignificant problems, this could not even be called passive resistenz! Kershaw argues in source 3 that “a large proportion of the population did not even passively support the resistance, but actually condemned it.” This argument suggests that there was resistance and resistenz but even as late as “1944” it was totally insignificant, “resistance to Hitler was indeed `resistance without the people. `”

The fourth point is also linked to fear and the efficiency of the police state. This argument puts forward that any open resistance was crushed immediately and any forms of resistenz were so scared that they daren’t discuss with others and was therefore divided. Source 3 states that

The second problem is that not only are there very few people who are willing to openly resist but this limited opposition was highly divided. Throughout society there were rifts that prevented coalitions joining forces to create a useful resistance. The most obvious rift was between the middle and the working class. Both of these classes controlled many of those who resisted through resistance and resistenz. However due to the political rifts between them they were never able to join together to create a more powerful, efficient resistance to the regime. It was fortunate for Hitler that “class tradition kept the working class at a distance from the lower middle class.” Also with policies such as Volksgemeinschaft the class structure was scrambled leaving a lot of citizens disillusioned.

The third  strength of the Nazi police state. The SS were one of the most ruthless and efficient police states in world history.

Strength of the police state

Satisfaction with the regime