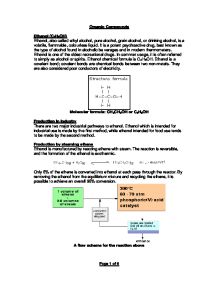 Organic Compounds Ethanol (C2H5OH) Ethanol, also called ethyl alcohol, pure alcohol, grain alcohol, or drinking alcohol, is a volatile, flammable, colourless liquid. It is a potent psychoactive drug, best known as the type of alcohol found in alcoholic beverages and in modern thermometers. Ethanol is one of the oldest recreational drugs. In common usage, it is often referred to simply as alcohol or spirits. Ethanol chemical formula is C2H5OH. Ethanol is a covalent bond; covalent bonds are chemical bonds between two non-metals. They are also considered poor conductors of electricity. Molecular formula: CH3CH2OH or C2H5OH Production in Industry There are two major industrial pathways to ethanol. Ethanol which is intended for industrial use is made by the first method, while ethanol intended for food use tends to be made by the second method. Production by steaming ethene Ethanol is manufactured by reacting ethene with steam. The reaction is reversible, and the formation of the ethanol is exothermic. Only 5% of the ethene is converted into ethanol at each pass through the reactor. By removing the ethanol from the equilibrium mixture and recycling the ethene, it is possible to achieve an overall 95% conversion. A flow scheme for the reaction above The equation shows that the ethene and steam react 1:1. In order to get this ratio, you would have to use equal volumes of the two gases. ...read more.

Uses Percentage Use (%) Alcohol 35 Solvents 15 Fuel 40 Industrial methylated spirits 10 Properties Melting Point -115�C Boiling Point 78�C Solubility in Water Completely miscible Ethanol has a low melting point due to the weak intermolecular forces but are higher than expected due to hydrogen bonding (hydrogen bonding is the strongest of the weak intermolecular forces). Covalent bonds such as ethanol generally have a low melting and boiling point this is because they don't have any bonds which need to be broken, because it is an intermolecular force it makes it easy to pull apart the molecules, it is because of this that hydrogen bonds are easy to break. This is the reason why ethanol is used to make fuels. Ethanol is a colourless liquid with a pleasant smell. Ethanol is easily miscible in water and is a good solvent. Ethanol is less polar than water this is a reason why it is used to make solvents and perfumes. Ethanol is volatile sit I used in solvents as is it dries quickly. Ethanol is very soluble in water due to interaction with polar water molecules. It easily solutes in non-polar solvents this is all due to non-polar and van der waals forces interaction. Ethanol cannot conduct electricity because the electrons are not free to move. ...read more.

Ethyl Ethanoate is more volatile so it is used in solvents as it dries very fast (even quicker than ethanol). It is not very soluble due to any interaction with the polar water molecules; however it is slightly soluble in non-polar solvents- this is due to the non-polar/ van der waals forces interaction. It is used as a solvent which allows it to mix polar and non-polar substances. It is not a very good conductor of electricity due to electrons which are not free to move. It is used in flavourings as it has a sweet smell. The substance Ethyl ethanoate (Ethyl acetate) is a fragrant, colourless liquid ester that is flammable and volatile. Produced from ethanol and acetic acid, it is used in diverse industrial applications as a solvent. The presence of esters can cause the fruity flavours and aromas, such as banana, blueberry, and pear that intentionally or unintentionally occur in some beers. This is non-hygroscopic in nature and is used as a solvent in chemical industry. Further, these ethyl acetate solvent are also used to decaffeinate coffee beans and tea leaves, in paints as an activator or hardener, is an effective poison for use in insect collecting and study and can also be used during the preparation of photographic films and plates as well as a drug intermediate and is relatively non-toxic. This is also a non-polar chemical which does not dissolve in water however is able to mix into the water. ...read more.