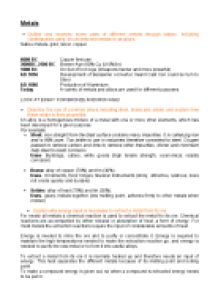 Outline and examine some uses of different metals through history, including contemporary uses, as uncombined metals or as alloys.

﻿Metals 1. Outline and examine some uses of different metals through history, including contemporary uses, as uncombined metals or as alloys. Native metals- gold, silver, copper 6000 BC Copper first use 3000BC-2500 BC Bronze Age (90% Cu &10%Sn) 1000 BC On Set of Iron Age (Weapons harder and more powerful) AD 1856 Development of Bessemer converter meant Cast Iron could be turn to Steel AD 1886 Production of Aluminium Today A variety of metals and alloys are used for different purposes. LOOK AT ESSAY FOR BRONZE AND IRON AGE! 1. Describe the use of common alloys including steel, brass and solder and explain how these relate to their properties. An alloy is a homogenous mixture of a metal with one or more other elements, which has been developed for a given purpose. For example: 1. Steel: iron straight from the blast surface contains many impurities. It is called pig iron and is 96% pure. Too brittle to use in industries therefore converted to steel. Oxygen passed to remove carbon and lime to remove other impurities. Nickel and chromium help steel to resist corrosion. Uses- Buildings, cutlery, white goods (high tensile strength, economical, resists corrosion) 1. Brass: alloy of copper (70%) and tin (30%) Uses- Ornaments, Door hinges, Musical Instruments (shiny, attractive, lustrous, does not erode quickly and durable) 1. Solder: alloy of lead (70%) and tin (30%). Uses- glues, metals together (low melting point, adheres firmly to other metals when molten) 1. Explain why energy input is necessary to extract a metal from its ore For nearly all metals a chemical reaction is used to extract the metal fro its ore. Chemical reactions are accompanied by either release or absorption of heat, a form of energy. For most metals the extraction reactions require the input of considerable amounts of heat. Energy is needed to mine the ore and to purify or concentrate it. ...read more.

1. Identify an appropriate model that has been developed to describe atomic structure. Bohr Model A modified version of the Bohr 1913 model is used to explain the properties of atoms and elements. Aspects of the Bohr model are 1. A single electron moves around the nucleus in a circular orbit 2. The energy of the electron is restricted to certain values/levels 3. Atom is composed of a small, central nucleus made up of protons and neutrons 4. Electrons occupy stationary levels and do not radiate energy 5. First energy level ? lowest energy level 6. The inertia of the electron would tend to move it away from the nucleus but the inertia is counterbalanced by the electrostatic attraction which exists between the positive nucleus and the negative electron 7. Electron can absorb a quantum of energy and move to an excited state. It can radiate energy by ?falling? back to a more stable state. 1. Outline the history of the development of the Periodic Table including its origins, the original data used to construct it and the predictions made after its construction. Scientist Dates Contribution Democritus 400 BC Suggested that matter is composed of atoms Robert Boyle 1660 AD Defines elements and compounds Antoine Lavoisier 1772-1785 Classified metals as non-metals or metals based on physical and chemical properties. Humphry Davy 1805-1807 Discovered Na, K and Ca Johann Dobereiner 1817-1829 Observed physical and chemical similarities of groups of three elements (triads) Alexander Beguyer 1862 Developed a vertical, helical period table ?telluric screw? John Newlands 1864 Classified the known elements into ?octaves? in order of their atomic weight. Lothar Meyer 1964-1870 Tabulated valency as a function of atomic weight Dmitri Mendeleev 1869-1871 Mendeleev?s Periodic Law: the properties of elements vary periodically with their atomic weights. Proposed a period table based on increasing atomic weights and predicted properties of undiscovered elements. William Ramsay 1893-1898 Discovered noble gases Henry Mosely 1914 Proposed the atomic number (Z) ...read more.

The gangue remains at the bottom of the tank and is discarded to a tailings pond. 3. Roasting and smelting- 1. the dried concentrated mineral is mixed with coal, lime and sand (SiO2) and roasted (1000ºC) in an oxidizing atmosphere to form a mixture of sulfides and oxides of copper and iron. Energy is supplied from the heat released in the combustion of coal. The sand and lime act as a flux to remove the iron impurities as a molten slag of iron (II) silicate. 2. At the end of the roasting stage the copper is present as molten mixture of copper (I) oxide and copper (II) sulfide [called a copper matte (50-70% copper)]. 3. In the final stage the copper matter is mixed with more sand and smelted in the furnace to form molten ‘blister’ copper metal (98% pure). 1. Electrolytic refining- The blister copper from the smelter is made into copper anodes and a pure copper sheet from the cathode in the electrolytic cell. Copper oxidises at the anode and copper ions are reduced at the cathode to form layers of pure copper (99.9% copper). Anode (+) -- Cu(s) → Cu2+ + 2e- Cathode (-) – Cu2+ + 2e- → Cu(s) 1. Recount the steps taken to recycle aluminium. 1. Collection of Aluminium Products: Scrap Aluminium is collected be individuals, community groups and council collections. 2. The Aluminium is sorted and separated according to different alloy types: As aluminium is not magnetic, steel can be removed from the scrap by the use of magnets. Used cans are separated from other aluminium scrap; this allows their alloy composition to stay constant. 3. Preparation: The cans are weighed, cleaned and squashed together and baled into blocks. These blocks are taken to the furnace. 4. Remelting and refining: The blocks are tipped into a rotary furnace where they are melted. 5. Casting: The molten aluminium is poured into a mould to make ingots. 6. Recycled aluminium ready to be reused: The ingots are taken to where they can be formed into new aluminium items. ...read more.