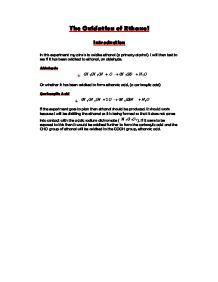 The Oxidation of Ethanol Introduction In this experiment my aim is to oxidise ethanol (a primary alcohol). I will then test to see if it has been oxidised to ethanal, an aldehyde. Aldehyde * Or whether it has been oxidised to form ethanoic acid, (a carboxylic acid) Carboxylic Acid * If the experiment goes to plan then ethanal should be produced. It should work because I will be distilling the ethanal as it is being formed so that it does not come into contact with the acidic sodium dichromate (). If it were to be exposed to this then it would be oxidised further to form the carboxylic acid and the CHO group of ethanal will be oxidised to the COOH group, ethanoic acid. Observations During the experiment a number of observations were made indicating how the substances had reacted. These are recorded in the notes below: Adding the Sodium Dichromate * As I was adding the sodium dichromate to the sulphuric acid, I recorded that the solution changed from orange to green. ...read more.

As well as this it is a group 3 carcinogen which means that if inhaled there is some (little) risk it may cause cancer. So as to minimise the risks and to prevent a violent reaction the sodium dichromate will be dripped into the ethanol slowly. Also as the ethanol will be used in a well ventilated lab, the risks will be reduced Sodium Dichromate The Sodium Dichromate solution is very harmful if it touches the skin and causes severe burns, also it is dangerous to inhale. Ethanal As with ethanol, ethanal is extremely flammable and a narcotic. As the ethanal will be used in a well ventilated lab, the risks will be reduced and I will always keep the ethanal in sealed container to minimise inhalation 2, 4-Dinitrophenylhydrazine DNO is also flammable and harmful if swallowed or if it comes into contact with the skin. As with the , the DNO will be handled by means of a pipette to avoid any unnecessary skin contact The volumes of chemicals used in this experiment are relatively small, so do not impose a great risk to pupils, if they are handled with care. ...read more.