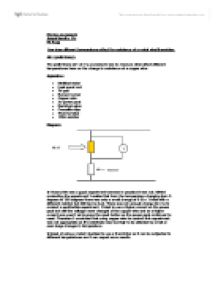 How does different temperatures affect the resistance of a metal wire/thermistor.

The preliminary aim of my coursework was to measure what affect different temperatures have on the change in resistance of a copper wire.

In theory this was a good experiment however in practice it was not. Whilst conducting the experiment I realise that from the temperature changing from 0 degrees to 100 degrees there was only a small change of 0.01v. I tried with a different resistor but still had no luck. There was not enough change for me to conduct a worthwhile experiment. I tried to use a higher current on the power pack but still the voltage never changed of the copper wire and as a higher current was used I ad to press the reset button as the power pack continued to reset. Therefore I concluded that using copper wire to conduct this experiment was not appropriate as it’s resistively was too high to be affected by small or even large changes in temperature.

Aim:
The aim of my investigation is to see whether the resistance of a thermistor (a type of temperature sensitive resistor) is directly proportional to the temperature.

To decrease the temperature of the water that the thermistor will be in.

To heat the water the thermistor will be in.

To know when to take the resistance reading and to measure the temperature of the water.

To provide an environment where the temperature change can take place so the thermistor's resistance can change.

To see what effect it has on the thermistor

For the beaker to be heated on.

To measure the p.d across the thermistor

There is only element that provides a major risk in this experiment this being the extremely hot water. There is no real protection against this but if precautions and care is taken with regards to the surroundings and others working in the vicinity.

Further more the voltmeter may have needed to settle, but because the water was always being heated or cooled, it would have not had time to do so and so was not reading the resistance/voltage at the actual temperature, but rather it was behind.

In addition to this the thermistor itself has a relatively slow reaction time to the change in temperature. By using a resistance thermometer, this response time can be decreased dramatically. The thermistor may have been releasing some energy also which it will have then sensed, and will have affected the thermistor's resistance.

The thermometer has a 0.03% error margin and the thermistor has a 10% error margin. This gives a total maximum percentage error of 10.03%, which is very high. The accuracy and stability of the voltmeter is an additional consideration to add to this figure. Such a high percentage error margin is likely to have been the most influential source of inaccuracies in the results.

Further more I could do other investigations having done this in the future I could use a PTC thermistor instead of the NTC thermistor used. Also I could use other semi conductors or even I could change the resistance to see its effects on temperature, I could also go back to my original idea, which was to see what effect the temperature of water has on a coiled metal wire.