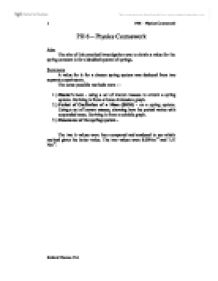 Physics - The aim of this practical investigation was to obtain a value for the spring constant k for a decided system of springs.

The aim of this practical investigation was to obtain a value for the spring constant k for a decided system of springs.

A value for k for a chosen spring system was deduced from two separate experiments.

The some possible methods were : -

The two k values were then compared and analysed to see which method gives the better value. The two values were 8.09Nm-1 and 7.57 Nm-1.

I will plot an F-x graph from which I will obtain a gradient and y-intercept which I can use to compare the above equation to the straight line equation y = mx + c where mx = gradient and, c = y-intercept

For the mean extension we must calculate

So, the Centroid value for the x-axis is 553.93. This is plotted with the mean value for the y-axis and together they make our centroid.

The graph that was drawn from the results was made up of two lines for maximum and minimum slope values which both had to pass through the error boxes and centroid. From the graph I took two gradients for each line and calculated an average gradient for each for accuracy. These gradients worked out to be.

Where, T = the period (time taken for one complete oscillation) of the eeeeeeeeeeeespring in seconds (s)

k = the spring constant in kilograms per second squared (kgs-2)

Rearranging the equation by squaring it we can form

As in the graph for Experiment 1 but more so the maximum and minimum gradients bisects the axis equidistantly either side of the origin (0,0). Therefore, this graph demonstrates the direct proportionality between T2 and Mass. The smaller masses were more difficult to time as they did not settle into a rhythm as easily as larger masses and oscillated faster. This increased human error and, therefore, overall % error in the timing and, ultimately, T2.

Once again, I could have weighed the masses on a balance instead of relying on the quoted values. This would have increased the accuracy of my masses as the error gets bigger as mass increases. Timing accuracy could have been improved by using a more accurate timing device. A system of computer linked light gates could have been used to eliminate human error in measuring rate of oscillation. As with Experiment 1 repeat readings would both increase reliability of readings and mean value.