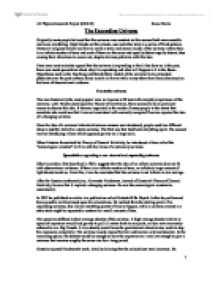 Originally most people believed that the universe was constant as this seemed both more sensible and more comforting. Most Greeks set the planets, sun and other stars in a series of fixed spheres. Newton’s religious beliefs lead him to create a static and eternal model of the universe where there is an infinite number of stars and each of them are the same and equally distant equally distant, thus causing their attractions to cancel out, despite obvious problems with this idea.

Even once most scientists agreed that the universe is expanding or that it has done so in the past, there was much speculation about why it is expanding and what will happen to it in the future. Hypotheses such as the Big Bang and Steady State models of the universe have persuaded physicists over the past century. Some remain in favour while many others have been dismissed on the basis of observational evidence.

This was historically the most popular view as it seems to fit best with everyday experience of the universe. Until Newton developed his Theory of Gravitation, there seemed to be no particular reason to dismiss this idea. It became ingrained in the minds of many people to the extent that scientists who could see that it was not consistent with currently accepted Theories rejected the idea of a changing universe.

Once the idea of a universal attraction between masses was introduced, people used two different ideas to justify a belief in a static universe. The first was that God held everything apart. The second was by introducing a force which opposed gravity on a large scale.

When Einstein formulated his Theory of General Relativity, he introduced a force called the “cosmological constant” to fit in with his views of a stationary universe.

Speculation regarding a non-eternal and expanding universe

Olber’s paradox, first described in 1823, suggests that the idea of an infinite universe does not fit with observational evidence. If there is an infinite number of stars, an infinitely large amount of light should reach us. From this, it can be concluded that the universe is not infinite in size and age.

After the Russian mathematician, Alexander Friedmann, learned of Einstein's Theory of General Relativity, he saw that it implied a changing universe. He saw the cosmological constant as unnecessary.

In 1922 he published an article in a publication called Zeitschrift für Physik. In this he put forward three possible realities based upon his calculations. He worked from the starting point of an expanding universe; this allows everything plenty of time to happen, while a universe created in a static state might be expected to contract in a small amount of time.

The scenarios differed in their average density of the universe. A high average density relative to speed of expansion would lead gravity to pull all matter back to one point, an idea now commonly referred to as a Big Crunch. A low density would leave the gravitational attraction too weak to stop the expansion completely. The universe would expand forever and become cold and desolate. In the remaining option, the density would be enough to slow the expansion to a rate low enough to give a universe that remains roughly the same size for a long period.

Einstein rejected Friedmann's work, initially claiming that the calculations were incorrect. He eventually admitted that the work was mathematically sound, but he maintained that it did not represent reality.

If the assumption that the universe is expanding is removed, collapse is the only possible outcome. Justification for this assumption was required and it soon arrived as a result of meticulous observation and measurement of the stars by Edwin Hubble.

But first, another important idea was announced. In 1927, a Belgian cosmologist named Georges Lemaître reasoned that if the universe is expanding, it must have previously been smaller. He extrapolated back from this to theorize that the whole universe must have once been small and compact. He called this state the “primeval atom” and it was the origin of the Big Bang Theory. This is not the only possible logical conclusion of the creation of an expanding universe, but it seems the most obvious and simple one, and therefore the first choice using Ockham's Razor, the idea that a simple solution is usually preferable to one that seems needlessly complicated.

Lemaître's work, just like Friedmann's, was rejected by the majority of the scientific community, including Einstein, upon whose theory their ideas were based. To persuade people, data was needed.

The easiest way to get a rough idea of the distance to a star is to compare its brightness to that of a star of known distance. The amount of light observed is inversely proportional to the square of the distance to the star. If two stars are equally bright, this can be used to work out the ratio of their distances.

Stars vary greatly in brightness, so this method can only give a very rough figure. It's accuracy was improved by focusing on a group of stars that are believed to be of approximately the same level of brightness. This group came in the form of Cepheid variables. The brightness of these fluctuates over time and the speed at which this happens can be measured. Data from Cepheids in the Small Magellanic Cloud (so the distances should all be reasonably similar) suggested that the amount of light emitted could be linked to the period of oscillation. It therefore seemed reasonable to assume that the ratio of the squares of the distances of two Cepheid variables was inversely proportional to the observed brightness. (http://map.gsfc.nasa.gov/universe/uni_expansion.html)

Edwin Hubble used this to work out the distances to a large number of stars. All he now needed to see whether the universe was expanding, contracting or staying roughly the same in size was the recessional velocities of the stars. If the recessional velocities were mainly positive and proportional to distance from the Earth, it suggested an expanding universe. Mainly negative and getting more negative as you get further from us would indicate contraction. Mainly positive or negative with no correlation between speed and distance might suggest expansion in the first case and contraction in the second, but it would not be as simple as the other cases. A roughly even mixture of positive and negative recessional velocities would indicate a static universe.

Recessional velocities cannot be measured directly. The change in distance over a short period is too small relative to the starting distance for the imprecise measurement system previously described to detect. Hubble instead used the Doppler Effect to find out the speed of retreat.

The spectrum of observed light varies depending upon the elements present within a star. Each element gives a unique pattern of spectral lines. The amount these lines are red shifted can be used to measure the recessional velocity. Higher speeds result in a greater red shift.

f is transmitted frequency, v is velocity of approach of the object and c is the speed of the waves (the speed of light).

Hubble made measurements of the distance to and the red shift of a vast number of stars and concluded that stars have a recessional velocity directly proportional to their distance from us, as would be expected in an expanding universe. He came up with Hubble’s Law, which states

v is recessional velocity, H0 a constant (Hubble’s constant) and d is distance. 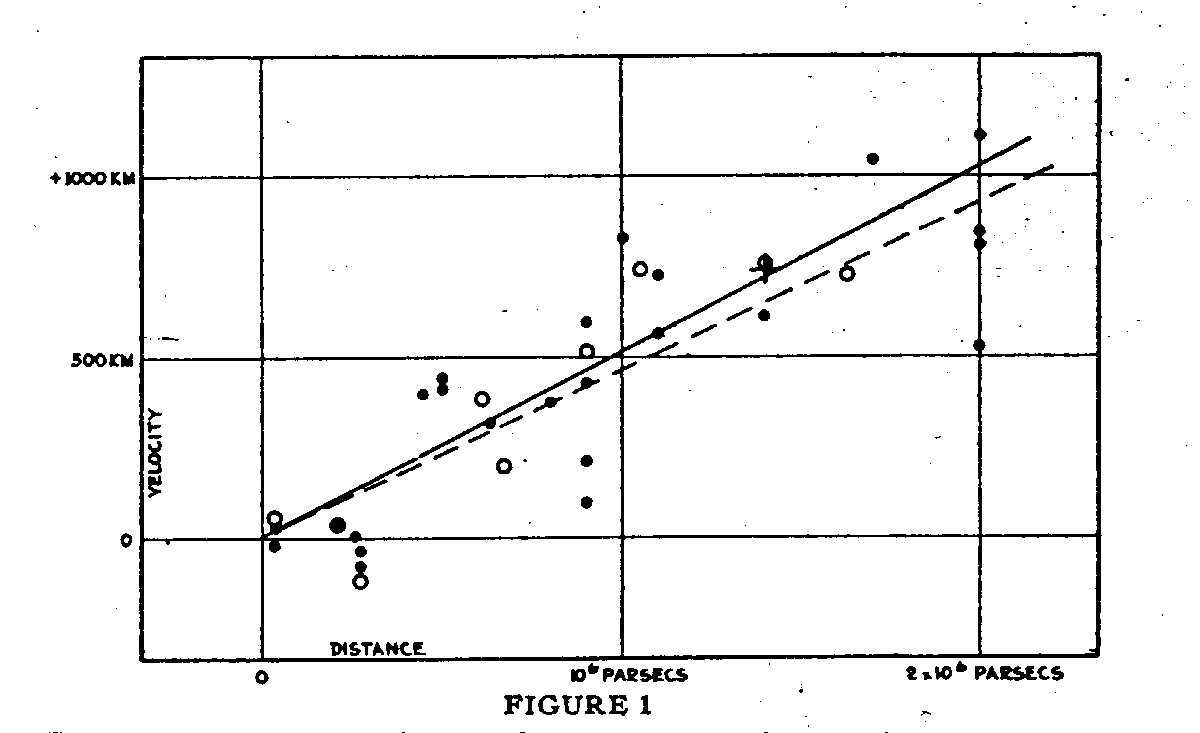 Hubble drew the above graph to show his results. The distance estimates have since been revised upwards. (http://www.phys.unsw.edu.au/astro/wwwlabs/hdfSize/hdfSize_intro.html)

Early estimates of Hubble’s constant placed it at around 50-100kms-1Mpc-1, while newer estimates have narrowed it down to around 70-80kms-1Mpc-1.

Hubble’s constant can be used for several things, including estimating the age of the universe. I shall use it to work out the approximate distance away a star would have to be for the observed frequency to be half the emitted frequency.

One Mpc is roughly 3.26x106 light years, so the star would be about 6.5 billion light years distant.

Fred Zwicky suggested in 1929 that light may lose energy as it travels, which would explain the proportional relationship between red shift and distance. This idea was called the Tired Light hypothesis. This idea has not been very popular as it has trouble explaining some observations while expansion seems a much simpler solution. (http://www.astro.ucla.edu/~wright/tiredlit.htm)

The Big Bang is the idea that the whole universe was created by the expansion of a very small and heavy region.

The Steady State theory states that the universe is infinite in age, but new matter is constantly being created and space is expanding.

Both theories gained great popularity, but there were some problems with the Steady State idea (http://www.alief.isd.tenet.edu/Hastings/student/2/steadystatestands.html). Some stellar objects, such as quasars, were only found at large distances, suggesting that the universe has changed in appearance over time, contrary to the Steady State principle that the universe should have been similar throughout time, despite its expansion.

It also had trouble explaining the relative abundance of different elements, which is something the Big Bang model was able to do after a variety of calculations, including those published in the Alpher-Bethe-Gamow paper (http://physicsworld.com/cws/article/news/30915).

Olber’s paradox may again be seen as a problem, though the suggestion was put forward that the light would be red shifted, so the sky would not always be bright as the red shift would move the light to a non-visible region.

Despite this, the Steady State theory remained popular. One set of observations, however, changed this. The existence of Cosmic Background Radiation was predicted by the Big Bang model and it was detected in 1964 (http://archive.ncsa.uiuc.edu/Cyberia/Cosmos/Footprints.html). Some proponents of the Steady State theory attempted to explain this as the result of scattered light from distant stars, but they could not explain the black body spectrum produced.

Following these results, the Big Bang theory became dominant and it currently remains so.

All the sections up to, but not including, “Observations suggesting and expanding universe” are sourced from Big Bang by Simon Singh. Published by Fourth Estate in 2005.

These sources should both be reliable as the second was published by the IoP, while the first is a well known popular science book, so any errors would have probably been highlighted by now.

These sources are all from university websites, so should be reliable.

Physics World is a magazine published by the IoP, so should also be reliable.

According to the website, Thinkquest is written by students under a qualified teacher. Although it is not necessarily as reliable as the other sources, I feel that this is sufficient to ensure that the information is accurate.

I looked at Wikipedia several times during the writing process, but felt that a user-written encyclopedia would not be a reliable source.