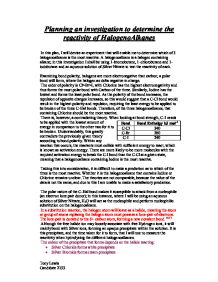 Planning an investigation to determine the reactivity of HalogenoAlkanes

Planning an investigation to determine the reactivity of HalogenoAlkanes In this plan, I will devise an experiment that will enable me to determine which of 3 halogenoalkanes is the most reactive. A halogenoalkane is a halogen containing alkane; in this investigation I shall be using 1-bromobutane, 1-chlorobutane and 1-iodobutane and an aqueous solution of Silver Nitrate to test the reactivity of each. Examining bond polarity, halogens are more electronegative than carbon; a polar bond will form, where the halogen as delta negative in charge. The order of polarity is Cl>Br>I, with Chlorine has the highest electronegativity and thus forms the most polar bond with Carbon of the three. Similarly, Iodine has the lowest and forms the least polar bond. As the polarity of the bond increases, the repulsion of opposite charges increases, so this would suggest that a C-Cl bond would result in the highest polarity and repulsion, requiring the least energy to be applied to be broken of the three C-Hal bonds. Therefore, of the three halogenoalkanes, that containing Chlorine should be the most reactive. ...read more.

It is this precipitate, and the time taken for it to form, that I will use to measure the reactivity when hydrolysing the different halogenoalkanes. The colour of the precipitate that forms depends on the halide reacting: * Silver Chloride forms white precipitate * Silver Bromide forms cream precipitate * Silver Iodide forms yellow precipitate. Ref 2 The equations for the reactions that will take place are identical, excluding a change in halogen, of course, are as follows for Bromine: CH3CH2CH2CH2Br + HO CH2CH2CH2CH2OH + H+ + Br- (HBr) Ag+ (aq) + Br- (aq) AgBr (s) By simply replacing "Br" with either 'Cl' or 'I', the equation remains the same. Drawn beneath the first equation is the mechanism of the nucleophilic substitution that occurs. Halogenoalkane properties Because halogenoalkanes are typically volatile liquids that do not mix with water, I shall be using a cosolvent that will dissolve both, ethanol. The ethanolic Silver Nitrate will allow the halogenoalkane to react with the water, and the halide ion to leave. It is it then able to bond with free Silver ions. ...read more.

Method 1. Measure out 1 cm3 of ethanol and Silver Nitrate solution into a test tube, and mark a cross on the opposite side. Place in a beaker of water allow to reach the temperature of 45�C. 2. Start a timer when adding one drop of 1-chlorobutane. 3. Record the time taken for a precipitate to form and obscure the cross marked on the other side. 4. Repeat twice. 5. Repeat steps 1-4 for both 1-bromobutane and 1-iodobutane. By having each halide reacting three times, I can derive an average time taken for the cross to obscured. The faster it occurs, the more reactive it is. I can then deduce which of the three is the most reactive. Whilst doing the experiment, it is vital to beware of the safety precautions. Silver Nitrate is corrosive and causes burns and can form explosive silver fulminates with ethanol. Goggles should be warn to prevent damage to eyes, and care when handling to prevent any contact with skin. The halogenoalkanes are all highly flammable, but 1-bromo and 1-iodobutane are irritants to the eyes and skin, and can cause the respiratory system harm, so all reactions should take place in a well ventilated fume cupboard. ...read more.