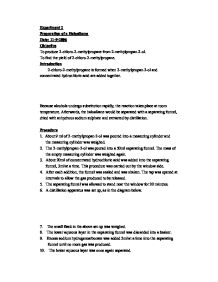 4. The drying agent itself also absorbs the haloalkane. This reduces the percentage yield. Another reason for a yield lower than expected may be due to too much organic layer in the separating funnel being treated as the junction layer and disposed of during separation. 5. The preparation of haloalkane from tertiary alcohol takes place at room temperature. This is due to 3 alkyl group being attached to the carbon atom. As a result, the carbocation intermediate is stabilized by 3 electron release alkyl groups, thus lowering the charge on the carbocation. Consequently, the activation energy required is reduced. If a primary or secondary alcohol was used, heating would be required in addition to zinc chloride catalyst. 6. When we do not know which layer of the separating funnel is aqueous, we simply add a drop of water into the separating funnel. The drop of water would merge with the aqueous layer, thus the layer which is aqueous can be determined. 7. The boiling point range for the product during distillation was 46oC to 53oC. The product is not very pure. ...read more.

A well written, concise investigation of average quality. All the basics are present but further explanation of procedure and experimental calculations would make this piece more detailed and clear, important for showing mastery of the subject and understanding. Being scientific ...

A well written, concise investigation of average quality. All the basics are present but further explanation of procedure and experimental calculations would make this piece more detailed and clear, important for showing mastery of the subject and understanding. Being scientific and concise is important but itÃ¢â‚¬â„¢s always worth making sure your work is understandable even by a non-scientist to ensure the experiment could be easily replicated.

Giving some background to the experiment and why it is carried out in industry etc. would help to show relevant but additional knowledge that may not be on the syllabus, evidence of reading around the subject is particularly vital at A level. I feel that at the moment the candidate has listed too much and not evaluated their method enough, there needs to be a section dedicated to evaluating and more could be written on experimental error, possible causes etc. as this is what the top candidates are including to achieve the best marks. Similarly expanding the conclusion to include more than just the bare findings would help but the particular aims of this investigation make this difficult. The lack of health and safety analysis is also a problem as including this would both help show your knowledge of chemical properties and ensure safety when the experiment is repeated.

Spelling, punctuation and grammar are all accurate allowing for a fluent piece.