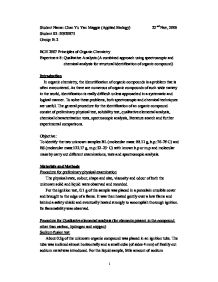 Student Name: Chan Yu Yan Maggie (Applied Biology) 22nd Nov, 2006 Student ID: 50920875 Group: B-2 BCH 2007 Principles of Organic Chemistry Experiment 8: Qualitative Analysis (A combined approach using spectroscopic and chemical analysis for structural identification of organic compound) Introduction In organic chemistry, the idenctification of organic compounds is a problem that is often encountered. As there are numerous of organic compounds of such wide variety in the world, identification is really difficult unless approached in a systematic and logical manner. To solve these problems, both spectroscopic and chemical techniques are useful. The general procedure for the identification of an organic compound consist of preliminary physical test, solubility test, qualitative elemental analysis, chemical characterization tests, spectroscopic analysis, literature search and further experimental comparisons. Objective: To identify the two unknown samples BL (molecular mass: 88.11 g, b.p.:76-78?C) and BS (molecular mass:122.17 g, m.p.:22-23?C) with known b.p or m.p and molecular mass by carry out different examinations, tests and spectroscopic analysis. Materials and Methods Procedure for preliminary physical examination The physical state, colour, shape and size, viscosity and odour of both the unknown solid and liquid were observed and recorded. For the ignition test, 0.1 g of the sample was placed in a porcelain crucible cover and brought to the edge of a flame. It was then heated gently over a low flame and behind a safety shield and eventually heated strongly to accomplish thorough ignition. Its flammability was observed. ...read more.

For the ignition test, it burned with a blue flame. Qualitative Analysis of Elements For the detection of nitrogen of procedure A, both the BS and BL unknown showed a negative result. No Prussian blue precipitate was present. For the detection of nitrogen of procedure B, both of them also showed a negative result. No red coloration was found. Therefore, both of them do not contain nitrogen. For the detection of halogens, both the BS and BL unknown gave a negative result. No observable changes were observed and there were no formation of precipitate. Thus, halogen was absent in both unknown samples. Solubility test For BS, it does not dissolve in water and HCL, but it dissolves in NaOH and gives a pink colour. It is also not dissolve in NaHCO3. Thus, BS is class A2 which may be phenols or some acids and anhyrides. For BL, it does not dissolve in water, HCL and NaOH, but it dissolves in H2SO4 and gives out a light yellow. Therefore, it is class N which may be alcohol, aldehydes, ketones, esters, ethers, unsaturated hydrocarbons or anhydrides. IR spectroscopy For BS, in the spectrum, there were a broad peak at 3384 cm-1 which indicated the presence of OH group for phenol, a little small peak at 3000 cm-1and peaks occurred at 910-1377 cm-1 indicating there is aromatic ring, peaks at 2852 cm-1 and 2923 cm-1indicating the presence of CH3 and CH2 groups. ...read more.

interfere with our deduction .This might due to the contamination of the unknown compounds or the present of impurities .Moreover, we used chloroform to clean the plate which might not evaporate completely before we put them in the spectroscopy. For improvement, wait for a while after cleaning the salts plates or apparatus used for IR spectroscopy so that the chloroform can fully evaporate in order not to interfere the results. All the unknown samples must handle carefully such as using a new dropper or spoon to take the sample out each time to reduce contamination chance to minimum. More Chemical tests can be done to further confirm the results. For the result of hydroxamate test for carboxylate ester, the first time result was between positive and negative. This might due to the present of impurities or the improper amount of the reactant used. Too much addition of ferric chloride for the last step of the test might also interfere with the result colour as it is yellow in colour. For improvement, make sure all the apparatus used are clean and the test can be done for one or two more times. Proper amount of the reactant is used and at most 3 drops of ferric chloride are added at the last step so that it will not cover the resultant colouration. Conclusion The given unknown solid BS with molecular mass of 122.17 g and m.p. of 22-23?C was 2, 4-dimethylphenol and the unknown liquid BL with molecular mass 88.11 g and b.p. of 76-78?C was ethyl acetate. 1 ...read more.