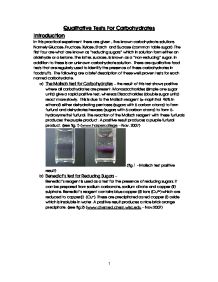 Qualitative Tests For Carbohydrates Introduction In this practical experiment there are given , five known carbohydrate solutions. Namely Glucose, Fructose, Xylose, Starch and Sucrose (common table sugar). The first four are what are known as "reducing sugars" which in solution form either an aldehyde or a ketone. The latter, sucrose, is known as a "non-reducing" sugar. In addition to these is an unknown carbohydrate solution. There are qualitative food tests that are regularly used to identify the presence of these carbohydrates in foodstuffs. The following are a brief description of these well proven tests for each named carbohydrate. a) The Molisch test for Carbohydrates - the result of this test shows positive where all carbohydrates are present. Monosaccharides (simple one sugar units) give a rapid positive test, whereas Disaccharides (double sugar units) react more slowly. This is due to the Molisch reagent (a-naphthol 95% in ethanol) either dehydrating pentoses (sugars with 5 carbon atoms) to form furfural and dehydrates hexoses (sugars with 6 carbon atoms) to form 5-hydroxymethyl furfural. The reaction of the Molisch reagent with these furfurals produces the purple product. A positive result produces a purple furfural product. ...read more.