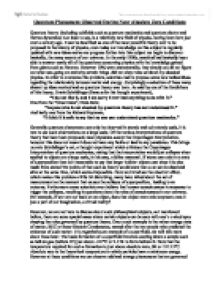 Quantum theory (including subfields such as quantum mechanics and quantum electro and thermo dynamics) is at least to say, is a relatively new field of physics, having been born just over a century ago. It can be described as one of the most powerful theory ever to be proposed in the history of physics, even today our knowledge on this subject is regularly updated with new ideas and as we progress further into this subject we begin to discover basically, the many secrets of our universe. In the early 1900s, mankind had basically been able to answer nearly all of the questions concerning physics with the knowledge gained from giants such as Newton. However 10% were unanswerable, they simply could not figure out what was going on and why certain things did not obey rules set down by classical physics. In order to overcome this problem, scientists had to propose some new radical ideas regarding the relationship between matter and energy. Surprisingly a selection of these many dreamt up ideas worked and so quantum theory was born. As said by one of the forefathers of this theory, Erwin Schrödinger (famous for his thought experiment),

“I do not like it, and I am sorry I ever had anything to do with it.”

oC. Also it should be noted that BEC can only be called a ‘true’ BEC when bosons, particles that carry a force, are supercooled, otherwise when other particles are used, the BEC can also be called a super atom (due to the fact that all the atoms are identical thus losing their individuality, all forming a single ‘blob’).

As I have mentioned earlier, BEC can be considered as a superfluid. One very special example of a superfluid is helium II. The boiling point of helium gas was found out to be 4K, therefore when cooled, helium I (normal liquid helium) can be seen boiling and bubbling away. However as the temperaure moves towards absolute zero, 0K, we notice a change in properties. As it nearly approaches 2K, all movement stops, and the helium becomes very still.

At approximately 2.17K, helium I becomes helium II, a superfluid. This point is known as the lambda point due to the shape of the above graph, which looks similar to the greek letter lambda (λ). Here the helium I show some remarkable properties, such as at this point, the viscosity or ‘treacliness’ of helium duudenly drops by a factor of a million, soon becoming zero. It also has zero entrophy, the measure of randomness of molecules in a system, and  infinite thermoconductivity.

other interpretations to be proposed, ranging from the mind boggling existence parallel universes to the controversial theory of the involvement of human consciousness as I have mentioned earlier. Apart from the demonstrations I have already described, there are other cases in which we can actually see quantum theory in action. One of the most famous experiments is the proof for wave-particle duality of light. However, this experiment actually demonstrates some support of the observer effect, in other words, the effect of human consciousness. If we make an experiment which proves that light is a wave, then the light particles will behave as a wave and only that. However, if we make an experiment that supports that idea that it follows the behaviour of particles, then the light would abandon its wavelike properties and act as a particle. Perhaps the wise words of Richard Feynman as mentioned earlier are able to sum up quantum theory for us; simply no one can understand it.