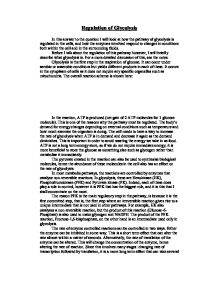 Regulation of Glycolysis In this answer to the question I will look at how the pathway of glycolysis is regulated in the cells, and how the enzymes involved respond to changes in conditions both within the cell and in the surrounding fluids. Before I talk about the regulation of this pathway however, I will briefly describe what glycolysis is. For a more detailed discussion of this, see the notes. Glycolysis is the first step in the respiration of glucose. It can occur under aerobic or anaerobic conditions but yields different products in each of these. It occurs in the cytoplasm of cells as it does not require any specific organelles such as mitochondria. The overall reaction scheme is shown here: In the reaction, ATP is produced (net gain of 2 ATP molecules for 1 glucose molecule). This is one of the reasons why the pathway must be regulated. The body's demand for energy changes depending on external conditions such as temperature and how much exercise the organism is doing. The cell needs to have a way to increase the rate of glycolysis when ATP is in demand and decrease it again as the demand diminishes. This is important in order to avoid wasting the energy we take in as food. ...read more.

PFK is inhibited allosterically by ATP. When an ATP molecule binds to one of the 4 allosteric sites, the graph of rate against substrate concentration changes from a hyperbolic shape to a sigmoidal one: AMP reverses this process, increasing the efficiency of the enzyme. There are two main reasons why AMP is chosen to do this rather than the more obvious choice of ADP: 1) under extreme conditions, the following reaction occurs: 2ADP --> AMP + ATP 2) as the concentration of AMP in the cell is always lower than that of ATP, it can be used as a sensitive control mechanism. This is because a small % change in [ATP] will be magnified into a larger % change of [AMP]. A drop in pH will also inhibit PFK as this can prevent a build up of lactate which could eventually lead to a drop in blood pH and acidosis. When the [H+] starts to build up, the rate of the PFK reaction therefore decreases, halting the glycolytic pathway and preventing the pyruvate from building up. PFK is also inhibited by citrate. This works by increasing the inhibition power of ATP. A build up of citrate in the cell normally means that biosynthetic precursors are abundant because citrate is one of the first compounds in the citric acid cycle, and therefore no more pyruvate molecules are needed for structural purposes. ...read more.

Also, because glucokinase has such a smaller affinity for glucose than HK, when blood glucose levels are scarce, the liver cells do not take up glucose, instead they leave what little glucose there is for brain and other cells. Pyruvate kinase is the final enzyme involved in the glycolytic pathway and is the other enzyme that is involved in the control of the pathway. It also comes in L and M forms in a similar way to the FBPase2 enzyme. This enzyme controls the out-flow of pyruvate because it is the last enzyme involved. ATP inhibits PK allosterically (as well as inhibiting PFK). This stops excess pyruvate being formed, instead allows the intermediates to build up to an extent, although even this is prevented by the HK regulation described earlier. Fructose-1,6-bisphosphate (the product of the previous irreversible step) activates PK to prepare it for the influx of intermediates it would then be about to receive after the activation of PFK. Alanine can be formed in one step from pyruvate. Alanine also inhibits PK, signalling an abundance of building blocks - as opposed to the ATP which signals an abundance of energy charge. When glucose levels are low, only the L form is phosphorylated by AMP cascade events, inhibiting it allowing muscle and brain cells to use the glucose first In summary, glycolysis is a finely tuned pathway of reactions that contains essentially three control points. ...read more.